Juliane Heyman Escaped the Holocaust in Europe. In the U.S., She Became the First Woman to Serve as a Peace Corps Training Officer. 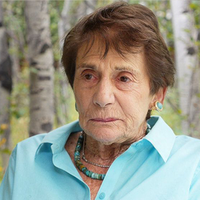 Born in the Free City of Danzig, now Gdansk, Poland, Julie Heyman was 12 years old when she fled her home due to increasing Nazi persecution. After months of being disconnected from her parents, she and her family were reunited in Brussels.

They fled again when the Nazis invaded Belgium. In 1941, Heyman arrived in New York by freighter. She graduated from Barnard College before earning master’s degrees in international relations and library science from U.C. Berkeley.

In what she calls one of her “most satisfying and exciting experiences,” she served as the first woman training officer for the Peace Corps in 1961. She worked 1961–64 in Washington, D.C. as a library advisor to several countries and international development consultant to Africa, Asia, and Latin America. In 2003 she published From Rucksack to Backpack, recollections of her life and travels from the 1940s to 1960s.

Heyman was always ready to face any challenge and saw her experiences as testaments to learning how to understand different people and perspectives. She died in April at age 97.