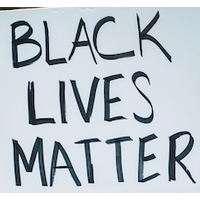 Reasons why. And some serious advice. It’s a matter of life and death.

ON MEMORIAL DAY a Black man named George Floyd was senselessly murdered in broad daylight on a Minneapolis street corner by a now former police officer. In the immediate wake of this completely avoidable tragedy, Minneapolis was rocked by protests, looting, and riots — exacerbated by ineffective leadership from all levels of our government, including detrimental interference from the White House. Yet Floyd’s killing has also launched a global movement in some 50 countries.

I’m a Minnesota native. As a child, I attended my first preschool just blocks from where George Floyd cried out for his mother as he took his last breath. Prior to joining Peace Corps in 2017, I lived in that neighborhood. In the days following his lynching by law enforcement, I’ve had concerned and well-meaning friends (particularly white friends) calling and messaging to check on me and ask if I’m OK. They have literally been asking if they can give me some form of compensation for the educational and emotional labor I’ve done for them, in order to help them make sense of recent and past events. Now they are seeking ways to help me. Needless to say, it has been an exhausting time as a resident — particularly a Black resident — of this state.

If I’m being honest, I was tired long before the George Floyd murder. 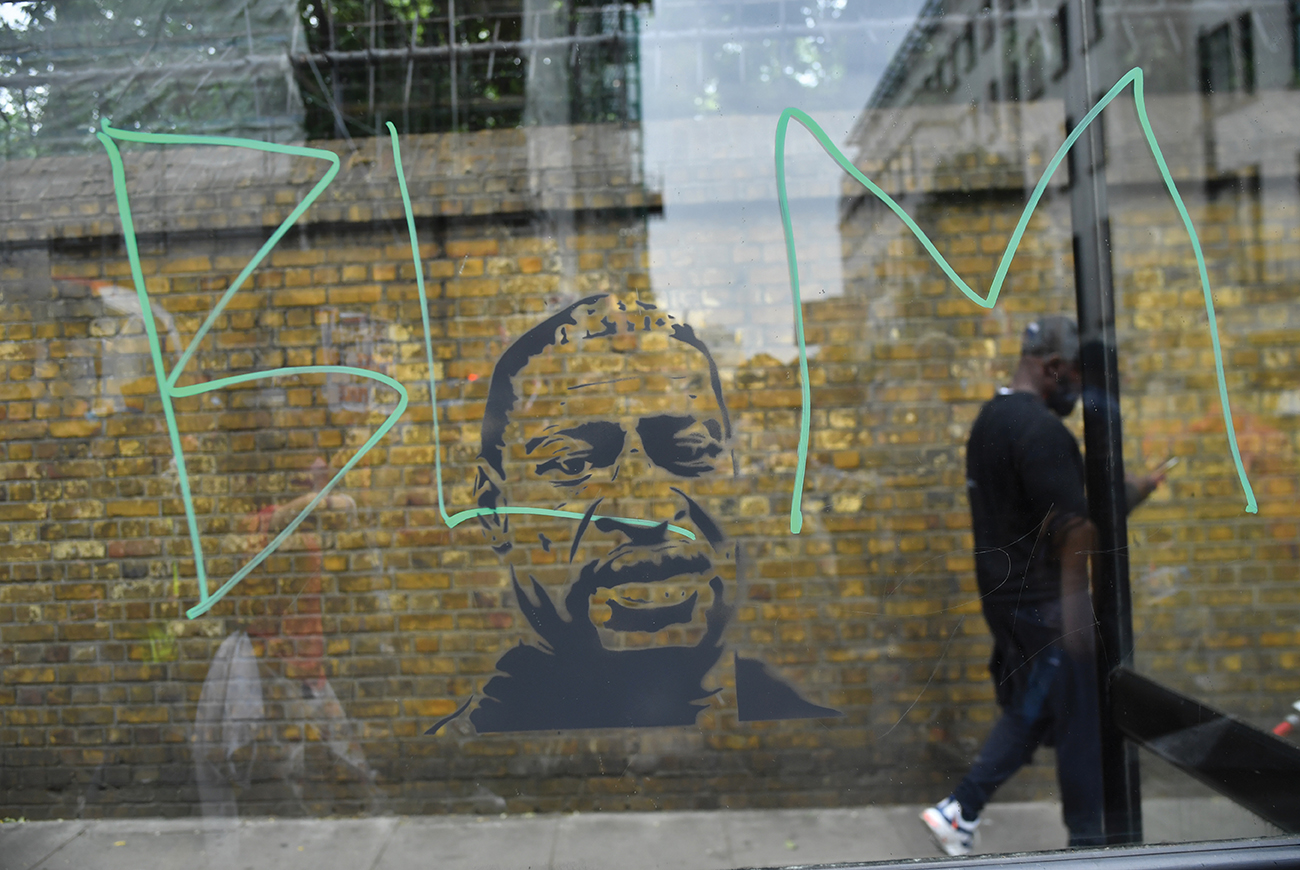 George Floyd, memorialized. When Missi Smith sat down to write about him, she noted: “I was raised to respect the rule of law and order (for God’s sake, my brother is a cop in the northern suburbs of our metro area). I was also raised to suss out injustice and seek change.”

LET ME OUTLINE the ways in which I am tired, in no particular order, including, but not limited to:

I’m tired of living in a state which through education and economic policy consistently fails its most vulnerable residents. According to a 2020 report from WalletHub, Minnesota ranks 45th for racial integration. Census Bureau data from 2018 tells us that the median income for a Black family was $36,000 compared to $83,000 for a white family. What about the education achievement gap? The graduation rate for Black students is 65 percent, compared to 77.8 percent nationally. That puts us dead last in the country. If Minneapolis alone put as much effort, time, and money into the school system as they do in their nationally rated park systems, our children might have better outcomes.

In Minneapolis and in other parts of the United States, I’m tired of watching, as one friend put it, “snuff films” justifying, even glorifying ending lives of Black men and women with reckless disregard, simply because police and vigilantes “fear for their lives” — or because they didn’t do a modicum of due diligence. I’m tired of hashtagging another Black life in memoriam.

I’m tired of the fact that a majority of Minneapolis police officers vote for Police Federation head Bob Kroll, who has been, as former Minneapolis Mayor R.T. Rybak recently put it, “toxic” to the police force. (Rybak was being extraordinarily charitable.)

In the face of the myriad historical and ongoing injustices Black men, women, and children face from housing to employment to education in this country, I’m tired of my anger as a Black woman (albeit righteous) being derided, ignored, and stereotyped.

I’m tired of the behavior of Amy Coopers, BBQ Beckys, and all of the Karens, injurious to Black freedom and liberty, going unchecked and unpunished.

I’m tired of having to revisit the same battles my grandparents and parents fought during Jim Crow and the Civil Rights Movement.

I am tired of having this conversation and the added expectation the societal ills of racism and white supremacy are solely up to the Black community to fix.

I’m so flipping tired that I want to take a nap — but I can’t, because I’m Black in America. The best I can hope for is some semblance of self-care, but it’s hard to maintain when you’re constantly attacked from every angle simply because you exist.

I AM SO VERY TIRED. Black people all across this country are so very tired. My question: Why aren’t you?

THE AMERICAN PSYCHOLOGICAL ASSOCIATION says that the chronic and sustained stress of racism and discrimination has a direct link to the overall health outcomes of Black people. This means Black folks put their lives on the line every day in this country, in every way possible — literally just by being Black and living in America. Why don’t you?

While Black people are not a monolith, we do have a shared experience in our diaspora, so I feel pretty safe in speaking for all of us when I say: WE. ARE. TIRED. So, my well-meaning and well-intentioned white allies and friends who keep asking if I’m OK, if you want to help, this is what you need to do. Again, in no particular order, including, but not limited to:

Stop asking us if we’re OK, because we’re not. We haven’t been for a long damned time — 400+ years since being forced here long, to be exact. (If you haven’t yet, read the Pulitzer Prize–winning 1619 Project from The New York Times.) Know that we are perpetually grieving because we are treated as less than second-class citizens in a country wherein so much of what you touch and to which you so proudly pledge allegiance was built with the literal blood, sweat, and tears of our ancestors — yet, we haven’t ever been given proper credit for it. We keep watching the lives of our husbands, sons, and daughters taken from us. Our transgender brothers and sisters are dying at an astronomical rate. In the same week Floyd was lynched at the hands of law enforcement, we lost Tony McDade to police violence in Florida with barely a mention of him in the press.

Listen to us. It’s literally that easy. Stop claiming ignorance, dismissing it, or sitting on the fence. Do something about it!

Believe us when we tell you about our lived experience of racism and discrimination. Listen to us. It’s literally that easy. Stop claiming ignorance, dismissing it, or sitting on the fence. Do something about it!

If you want to learn and do better, you’re going to have to start doing some heavy lifting. Librarians and historians can show you where to get the information and answer questions. Start thinking of your Black friends like librarians or historians rather than expecting them to coddle white feelings of defensiveness, anger, and shame.

Black history is more than the 28 days of February and far deeper than Malcolm X and Martin Luther King, Jr. — who are so often quoted out of context. Learn about it and value it the same way you learn about and value the traditional historical narrative of the white male American founding fathers.

Stop co-opting Black leaders. MLK wasn’t as non-confrontational as you want to believe. He was the quintessential agitator. He was the original highway blocker.

Stop with the “I’m not racist. I don’t see color!” Seriously, it’s embarrassing and it doesn’t make you “woke.” It’s not only lazy, it’s also infuriating to people of color — and it further dehumanizes us and devalues our many-generations-long struggles. And in this day and age, not being racist isn’t good enough. You must be anti-racist! Read from Robin DiAngelo and Tim Wise. They will help you in your quest.

Earlier I alluded to reparations. Journalist Ta-Nahisi Coates wrote in The Atlantic a compelling argument for why Black folks deserve reparations. Some Black people are comfortable with receiving reparations on an individual level; personally, I am not. So, to my friends: Please, stop asking if you can compensate me or buy me stuff. (Though I will always accept Irish whiskey. That is never off the table!) I’d rather you take that money and donate it to your local NAACP chapter, a school classroom to help bridge achievement gaps, scholarship funds for Historically Black Colleges and Universities, and other minority scholarship funds. Better yet, write your legislators and compel them to push an actual bill for reparations to give Black people economic parity. If the United States government can find $1.5 trillion in capital to inject into the casino of Wall Street after the 2008 financial meltdown, they can also fund long overdue payment of back wages. There are so many ways to give back to our community!

Stop passive-aggressively cringing at family get-togethers and call your racist family members out! Uncle Bob doesn’t get any mashed potatoes at this year’s holiday celebration and neither do you, until you call him out him just like you call out other public acts of racism and discrimination. This also goes for your co-workers and your bosses! (HR is there to support you with this.) Learn the difference between “micro-aggressions” and overt acts of racism. Telling Black people they’re “articulate” may not be a call to violence the way a cross burning is. But casual and veiled racism is what sustains racism on a systemic scale.

Telling Black people they’re “articulate” may not be a call to violence the way a cross burning is. But casual and veiled racism is what sustains racism on a systemic scale.

If you champion the men who threw tea into Boston Harbor to liberate us from England, don’t ever tell Black people how they should feel, protest, or otherwise process the atrocities they’re living through. It’s not cool and it’s not helpful, and it just upholds the status quo.

Check your privilege and use it for good.

Check your bias and eliminate it.

Say Black Lives Matter. Say it unequivocally. Say it with your full chest and scream it from the rooftops. Say it. Then act like it!

Be mindful of cultural appropriation. Despite what any fashion magazine tells you, Kylie Jenner didn’t invent cornrows and head wraps aren’t a new trend. In fact, do us all a favor and look into the historical significance of these in our cultures. You’ll quickly realize it is not a fashion statement but something much deeper and meaningful.

Stop praising Black people for being “resilient” and “strong.” In the eyes of American society, we don’t have any other choice but to be. Any other reaction to acts of racism are viewed as “angry,” “uppity,” “violent,” or “having an attitude.”

THIS LIST ISN’T EXHAUSTIVE, but if you care about me or Black people or Black culture at all, you’ll show up and show out for Black folks.

Now if you’ll excuse me, I’m tired. I’m going to pour myself a whiskey and try to relax.

Missi Smith served as a Peace Corps Volunteer in Kyrgyz Republic from 2017 until she was evacuated in 2020. She taught English and developed projects with students, teachers, law enforcement, and national television. This essay originally appeared on Medium and was also published in WorldView magazine’s Summer 2020 issue. Read the entire magazine for free now in the WorldView app. Here’s how: