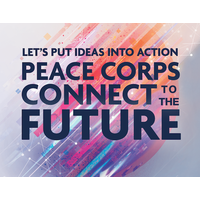 We’ve reached the summit. But this is not the end of the journey. Welcoming remarks for Peace Corps Connect to the Future.

Good afternoon, everyone. My name is Glenn Blumhorst. I'm President of National Peace Corps Association. And I was a Volunteer in Guatemala from 1988 to '91. And I've chosen today to represent my bio — what we're doing is a six-word bio for myself today — it is: "Serving you, the Peace Corps community." And I chose that six-word bio, because really, that's what this role here is all about for me at Peace Corps. We are about serving the community as an organization. And I have the honor and the privilege of being your servant as well and serving you as a member of this community. So I'm so very grateful for that opportunity.

I’m very pleased to welcome all of you to Peace Corps Connect to the Future, an ideas summit we're calling it. This is our first — and hopefully our last — virtual summit. This was a lot of hard work. And I just want to thank all the board directors, the members of our staff, volunteers, and family and friends and others who really contributed to making this all possible. It's a lot of work compared to an actual physical gathering, and it's a quite a different type of work that we had to undertake to make this happen.

Today, we would have been, normally, celebrating and “festivating,” I guess is the word, at our annual national conference in Seattle. Today would have been Peace Corps Connect in Seattle. But, as many of us know, things sometimes change.

And this year, what happened on March 15, 2020: We heard the Peace Corps announce that they were making the unprecedented decision to suspend all Volunteer programs and activities due to the COVID. And 7,300 or more Peace Corps Volunteers were brought home, and programs were suspended at that time. Lives were really turned upside down by the COVID pandemic. And that was just the beginning.

We responded to the returning Peace Corps Volunteers by launching the Global Reentry Program. You'll hear a little bit more about that later this afternoon. But it was intended to throw out the welcome mat to those 7,000 evacuated Peace Corps Volunteers and give them a long virtual embrace in welcoming them home from their service in what was very much a traumatic and abrupted situation for them — many of them who were not expecting to be where they are today after that transition.

We mobilized to help advocate for benefits to be enhanced for the evacuated Peace Corps Volunteers, and worked to support them as an organization with their jobs and academics and finding opportunities, connecting with the community after their return.

But ultimately, we had to decide to cancel Peace Corps Connect. And when we did, we were looking at a really grim situation here in the United States in terms of the pandemic, where the death toll had reached over 100,000 from COVID-19. And more than 40 million individuals had filed for unemployment since mid-March, many of them — and most of them, actually — in communities of people of color.

And then on May 25th, we witnessed the killing of George Floyd, an unarmed Black man at the hands of a white police officer. And his last words that we all heard: "I can't breathe." This sparked nationwide protests and the beginning of a reckoning with systemic racism. And I know personally, this struck me very deeply.

A few days after that, and just watching the news and absorbing what was happening, it really struck me that National Peace Corps Association as an organization needed to come out clear and articulate in what our position was, and what our reaction was to the situation. And we took a stand against racial injustice. We issued a May 31st statement. One of the things that we said was: "We condemn the actions that led to George Floyd's death, just as we condemn discrimination and violence against all Black people, and that includes members of the Peace Corps community."

Since then, a nationwide movement has opened our eyes and opened our hearts and minds. It's also sparked community-wide conversation on racism right here in our own Peace Corps community. And so, July 18, 2020, here we are now. After all of this — on what would have normally been a festive occasion for Peace Corps Connect up in Seattle, we're here virtually gathered all with all of you.

We want to ensure the future of the Peace Corps — that it not just survives, but that it emerges transformed — recreated, as many people have said, dramatically changed.

And this event, we decided to hold because we really felt that we needed to hear the collective voice of our community on the issues that are most important to you: first and foremost that of systemic racism, and how we are going to deal with it in our own community and our own institutions, including National Peace Corps Association. We heard from you also about concern about the Peace Corps and its future as well. And when Volunteers may someday, hopefully soon, be able to return back to their service, or new Volunteers will be able to be recruited and placed in their countries of service, just like we were.

So we held a number of town halls throughout the last two weeks, eight of them in total. And those town halls hosted conversations on a variety of different topics. And these topics then feed into this annual summit, and you're going to hear the report-outs from those town halls and you're going to hear the most salient issues that were identified, and even some really great ideas that came out of those. But I want to say that while we've reached the summit here after eight town halls, this is only the first step of many, in a very long journey. We have much more work to do. Beyond this summit, we have to now put words into action, ideas into action. It's not going to be downhill from the summit. It's not going to be downhill from here. We have hard work to do. And we have commitment to show.

We first, of course, want to ensure the future of the Peace Corps; we want to ensure that it not just survives, but that it emerges transformed — recreated, as many people have said, dramatically changed. It needs to be a new Peace Corps. I think we have all come to that understanding. We're going to hear a little bit later from the Peace Corps director herself, and she's going to share some of her thoughts about where Peace Corps is headed as it reemerges from this crisis situation.

But also, we want to achieve that vision that we have of a united and vibrant Peace Corps community. And that's our vision statement. But you know what? We need to include in our own vision statement that this is a community that needs to be one that is diverse, inclusive, and welcoming. And that is a powerful force for the change that we want to see. That, my friends, is our utmost priority going forward. And you have my commitment that I will do all I can and work hard for you and with you to make sure that happens.

So, while this weekend, we would have had a nice festive gathering up in Seattle, and we would have enjoyed connecting with each other and hugging — and real hugs, and catching up on telling stories to each other, enjoying the Seattle weather and all the fun up there — it really is an entirely different weekend than what we had anticipated just a few months ago.

A Moment of Reflection

But there's reason also today to have pause. Today, we're marking this today as Nelson Mandela International Day. We must remember that in all that we're facing right now, he represents our north star toward justice. So we're pleased to have our conference on his day and remember him and all that he stood for, and follow his commitment and his example.

Sadly, though, yesterday marked the sixth anniversary of the killing of Eric Garner; that remains such a reality in our minds. Guess what? His dying words as well, six years ago: "I can't breathe," repeated 11 times. Though it helped spark a movement in protest of police treatment of minorities, six years later, that happened again, those words echoed in the last minutes of George Floyd's life. It's a moment of sadness for Eric, for George, and for so many other Black Americans who have endured this violence for hundreds of years as a result of systemic racism.

And just last night, as we were making the final preparations for this event, we learned of Congressman John Lewis's passing. He was an icon of the justice movement. Martin Luther King spoke about the nation's bend toward justice. And that complicated bend was personified by Congressman John Lewis: as a radical, fighter, public servant, and friend. He was, of course, a wonderful supporter to all of the Peace Corps. And that came as no surprise, because in 1968, he married Lillian Miles, who would become his wife of nearly half a century. She was a Peace Corps Volunteer, serving for two years in Nigeria, and passed away just a few years ago. So in these most challenging times, and at this time of John Lewis's death, these challenging times for our nation, we have lost an icon in the struggle for racial justice in America.

I'd like to then take a moment and give a few minutes, a few moments of silence in reflection and remembering, mourning, and hope, as we reflect on all of these events that have struck our community and mean so much to us, if you'll join me, please, in just a moment of silence.

Glenn Blumhorst is President and CEO of National Peace Corps Association. He served as a Volunteer in Guatemala 1988–91.