In ‘Last Best Hope,’ George Packer Seeks to Find a Way for Americans to Talk with Each Other Again 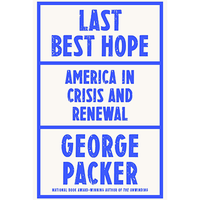 America in Crisis and Renewal

George Packer’s Last Best Hope: America in Crisis and Renewal is a self-described political pamphlet in long-form essay, not unlike Thomas Paine’s Common Sense, written in a period of change, about that very change. Packer’s goal is to find a way Americans can talk with each other again. A modest aim — but in this post-Trump era, perhaps an insurmountable task. Packer addresses what James Baldwin described as our tangled American problem: “In the same way that to become a social human being one modifies and suppresses and, ultimately, without great courage, lies to oneself about all one’s interior, uncharted chaos, so have we, as a nation, modified or suppressed and lied about all the darker forces in our history.”

Packer begins at the confusing, maddening moment when the government, as headed by Trump et al., utterly failed to protect Americans, or as Packer writes, “There was no national plan for dealing with the greatest threat of our lives.” It was not a time we were encouraged to come together to fight the invisible enemy, but rather we were manipulated by a leader who loved to pit people one against another, which culminated in a “strange defeat,” or as some have said, a Cold Civil War.

In his thesis, Packer breaks the nation down into four Americas as he proceeds to unravel the conundrum. Free America is Reagan’s America of low taxes, limited government, and lax regulation. Smart America is open to some of the terms of Free America — free trade, immigration, globalization — and is characterized by a belief in the value of education and meritocracy. Real America is anti-elite, in particular anti-coastal elites, as in Sarah Palin’s position of supporting the “real people,” meaning manual workers, farmers, and miners. In Trump’s version, it is a populist vision encompassing ethnonationalism. In earlier forms it was George Wallace’s white supremacy as well as the countervailing progressive populism expressed in William Jennings Bryan’s Cross of Gold speech at the Democratic National Convention of 1896. Just America is another rebellion, in that it takes a stand against the meritocracy of Smart America, seeing it as a failed promise and describing America as ultimately a caste system underpinned by structural racism that keeps underserved citizens of color and certain ethnic groups out of the meritocracy running.

Packer doesn’t want to live in any of these narratives, especially in their purest forms, because each in its own way abuses democracy, dividing us into seemingly irreconcilable tribes with increasingly rigid, uncompromising stances.

Packer doesn’t want to live in any of these narratives, especially in their purest forms, because each in its own way abuses democracy, dividing us into seemingly irreconcilable tribes with increasingly rigid, uncompromising stances. In his analysis, our common ground as a people and a nation has disappeared. He posits that we have to find a common ground if we’re to survive, starting with who we are as Americans and what differentiates us from other nation-states. He looks to Tocqueville’s description of our passion for equality, though Packer thinks we’ve failed to achieve it — but at least, he says, we still have that passion for equality, our openness, inclusiveness, our loud voices, and casualness with waiters. This all feels like grasping at straws, but one wants to go along with him as he leads us toward some kind of a solution: creating a fifth category, an Equal America, where we work toward equality of opportunity — not just hard-and-fast equal results — and where we relearn the arc of self-government.

His prescriptive ideas feel utopian in their progressive wish list: a national safety net; empowerment of workers; using the government to fight against monopolies that take away ordinary citizens’ economic freedom; not supporting public schools through a local tax-base that means rich neighborhoods — primarily white — always get better funding. He calls for civics education that teaches children how to think critically and supports national service for all. (Packer served as a Peace Corps Volunteer in Togo 1982–83.) He supports the idea of patriotism as a basic attachment to where you live, “the glue that holds us together,” as opposed to nationalism, which leads to the sins of exceptionalism, hegemony, protectionism, and discrimination against the “other.”

Packer goes a long way with his stunning, synthesizing prose to parse a path through the complicated forest of where we’ve gone wrong. Last Best Hope is a worthy contribution to the canon of political pamphleteering and analysis. One does find some hope in his attempt to save America from itself.

Marnie Mueller is the author of the novels Green Fires, The Climate of the Country, and My Mother’s Island. She served as a Peace Corps Volunteer in Ecuador 1963–65. This review is adapted from one originally published by Peace Corps Worldwide.