Meet the 2020 winners of the Loret Miller Ruppe Award: Friends of Korea and Friends of Tonga

National Peace Corps Association (NPCA) is pleased to announce the winners of the 2020 Loret Miller Ruppe Award for Outstanding Community Service: Friends of Korea and Friends of Tonga. The awards were presented on September 25 at the annual meeting of NPCA.

Named for the widely admired 10th Director of the Peace Corps, the annual Loret Miller Ruppe Award is presented by NPCA to outstanding affiliate groups for projects that promote the Third Goal of Peace Corps — “strengthen Americans’ understanding about the world and its peoples” — or continue to serve host countries, build group spirit and cooperation, and promote service. Announcing the awards this year was Mary Ruppe Nash, daughter of namesake Loret Miller Ruppe.

Here’s how these this year’s honorees have taken Peace Corps ideals to heart.

Friends of Korea: A guide to understand the transformation of a country

“We left Korea, but Korea never left us,” Gerry Krzic wrote recently. Krzic serves as president of Friends of Korea, a group founded by Returned Peace Corps Volunteers who served in the Republic of Korea from 1966 to 1981, when the Peace Corps program was closed.

Friends of Korea was established in 2002 to foster connections between people in U.S. and Korea — and between Korean-American communities stateside and wider communities. The group has also sought to foster cultural awareness and cultivate philanthropy.

In 2016, Friends of Korea started the Project “Study Guide to Accompany The Korean Transformation,” an easy-to-use manual for educators and workshop facilitators to use when teaching about the dramatic economic, social, and political development of Korea. The guide can be used independently or in conjunction with the “Korean Transformation” DVD (previously made by Friends of Korea). The Study Guide was planned for an initial printing of 40 copies for distribution — however, close to 300 were printed due to great demand. The Study Guide was promoted via electronic media, conference presentations, and teacher/young adult workshops.

Korea is the first Peace Corps partner country in the world to launch its own government-funded overseas volunteer service corps, “World Friends Korea.”

In accepting the award on behalf of Friends of Korea, Gerry Krzic also paid tribute to Loret Miller Ruppe, addressing her daughter Mary Ruppe Nash: “Mary, I know you have said your mother recognized that peacemaking is a lifelong mission and that she was committed to a spirit of cooperation and service,” he said. “We continue to share the same vision with her.”

As a book published this year by University of Washington Press details, Peace Corps Volunteers who served in Korea are also credited with playing an instrumental role in developing Korean studies as a discipline in the United States.

Learn more about Friends of Korea

Friends of Tonga: Helping kids tell their stories — and building connections across the world

“On February 11, 2018, Cyclone Gita, with winds that topped 233 km/h — category 4 hurricane strength — slammed into the Pacific island nation of Tonga,” Michael Hassett and Chiara Collette wrote for WorldView magazine. “It was the worst storm in over 60 years and wrought horrendous damage on the islands of Tongatapu and ‘Eua, resulting in two deaths and numerous injuries. More than 2,000 homes were damaged, crops were destroyed across both islands, and 80 percent of the Tongan population was left without power.”

As one of their projects, Friends of Tonga designed and implemented a pen pal exchange program between schools in the United States and Tonga. Teachers are provided with a pen pal guide that gives an overview of the program and its process. When possible, a Friends of Tonga representative has gone to participating schools to introduce both Tonga and the project to the teachers and students. When Friends of Tonga is unable to deliver a presentation in person, slideshows have been created for both Tongan and U.S. teachers to orient their students to the other culture.

To increase the impact of the program, teachers can also request specific presentations to match their units of instruction. For example, a kindergarten class in the U.S. requested a presentation that focused on transportation in Tonga.

To promote sustainability and engagement, a timeline was developed that takes into account the different countries’ school schedules and encourages each school to receive three letters per year. After the presentation is delivered, students are given a letter to respond to from their Tongan pen pal. These letter exchanges typically begin with basic introductory information (e.g. name, village name, favorite sports, and food, etc). As pen pal friends in Tonga become more proficient in English and become more comfortable with their pen pal in the States, the letters become more elaborate with detailed descriptions of life in Tonga. 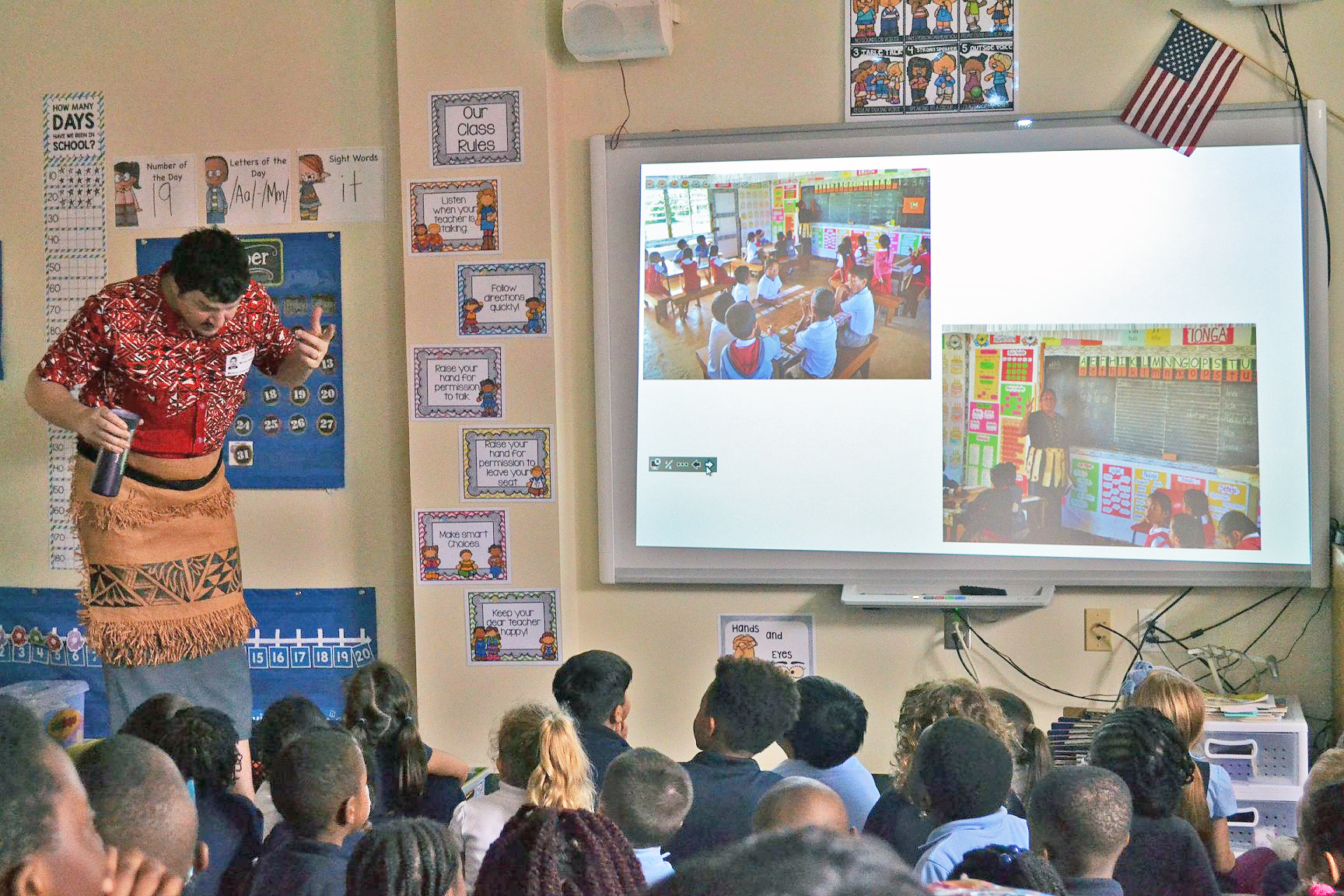 This program enhances literacy rates in Tonga, raises awareness of Tonga and its people, and has increased event participation and donations. “This project is extremely replicable!” says Michael Hassett. Friends of Tonga partners are provided with guidance and an orientation PowerPoint deck to present to their classes, digitally. All of these resources can be found online.

Why the focus on education? For Hassett, it’s personal. As a Peace Corps Volunteer in Tonga 2012–14, he taught in a rural primary school. “It was probably within my first two months at site, when a PTA parent asked if I would be willing to tutor her son in the evenings,” he said in accepting the award on behalf of the group. “ I agreed, and we planned to meet that very night. While waiting on my front porch for my new student to arrive, I was quietly listening to the evening sounds of my village: the pigs and chickens running across my yard, my neighbors preparing the cooking fires, and so on. Just out of eyesight, I heard a commotion. People were yelling in Tongan, ‘Sione, alu ki fe?’  (John where are you going?) Apparently, he answered — because parents began running out of their houses to yell-ask if Maikolo would also teach their kids.”

“Just out of eyesight, I heard a commotion. People were yelling in Tongan, ‘Sione, alu ki fe?’  (John where are you going?)”

It’s a story he tells to underscore how important education is in the community where he served. “Before my eyes, my one student multiplied into a crowd of high school kids from around the village, all bearing plates of food, watermelons, or loaves of bread to give to the palangi who was going to teach their kids English,” he said. “Naturally, I was both amused and shocked at how quickly a one-on-one tutoring session evolved into Maikolo’s Po’ ako (night class).”

And, Hassett says, as returned Volunteers Friends of Tonga are inspired by that spirit of the village coming together. “To be successful in Tonga, we had to adopt this sharing paradigm,” he said. “It seeped into who we are and it changed us.”

Learn about Friends of Tonga