Giving Voice to Refugees: Firsthand Accounts from Children and Teenagers — Some Many Years Later 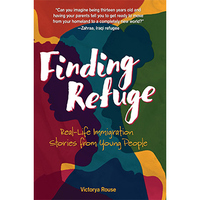 In the Newcomers Center at Ferris High School in Spokane, Washington, Victorya Rouse teaches immigrants from all over the world how to speak English. It’s work she has done for three decades, after she served as an education Volunteer with the Peace Corps in eSwatini (formerly Swaziland) 1981–84. For Finding Refuge, she has put together firsthand accounts of kids’ and teenagers’ experiences — some recounted many years later — to help young readers understand war, conflict, and what it means to be a refugee.

Many young refugees contributed memories of their lives before, during, and after evacuation of their home often due to political tension or aggressive conflict. Among the contributors: Fedja Zahirovic, who fled war in Bosnia in the 1990s; and Abdulrazik Mohamed, who fled the civil war in Sudan and, after years in refugee camps, arrived in Spokane in 2012. Other contributors were refugees from Libya and Syria, Iraq and Mexico, Moldova and Ukraine.

“The experiences that brought them here,” Rouse writes, “to my classroom—reflect the ongoing realities faced by refugees around the world.”

Fedja from Bosnia and Herzegovina, entered the U.S. in 1995

We were only able to bring clothes, some family photos, and documents — and I brought a few cassettes with my favorite music. My mom kept telling me to leave things. “We are only taking our clothes and toiletries.” It was like going on vacation, only this time I was bringing a lot more clothes. I couldn’t bring my guitar, piano, or record collection. My bike had already been stolen. I was leaving my few remaining friends and all of my family. My grandmother was staying behind to keep the apartment from being taken away by the refugees and to keep our cabin from being seized by the military. I felt like I would never get to see any of it again. I was right.

My grandmother was staying behind to keep the apartment from being taken away by the refugees and to keep our cabin from being seized by the military. I felt like I would never get to see any of it again. I was right.

Epilogue: Life was difficult for a long time, but my life is good now, and I try to give back and to help people whenever I can. My mother and grandmother live in Portland, near enough that I can see them often. I am married now. My wife has her degree in early childhood education. I do in-home care for people with developmental disabilities as I near completion of my B.A. in musicology and ethnomusicology. My dream is to get an M.A. in music education and to start my own music program for children who are immigrants, who are high risk, or who have learning disabilities—in other words, those who often don’t have the access or privilege to enroll in regular music programs.

On the ship, women and children were being sent to the upper deck, and the men to the lower deck. Somehow, on that huge ship, we all found each other. It was a miracle: The whole family — all ten of us children and both parents — made it onto that ship. So few families made it out together.

People were crowded together like sardines. We couldn’t even lie down. We didn’t have room to move. The ship took us to the Philippines, but on the way, we ran out of food and water. I was so hungry and thirsty. Someone told us to tap sea water on our lips. We couldn’t drink the sea water, but we could make our lips damp.

“On the ship, women and children were being sent to the upper deck, and the men to the lower deck. Somehow, on that huge ship, we all found each other. It was a miracle: The whole family — all ten of us children and both parents — made it onto that ship.”

In the Philippines, we were given military C-rations. I had peanut butter for the first time. Peanut butter and crackers were so good. There was cheese too. It was so good to eat again. There we were transferred to an even bigger ship and taken to Guam. There were not enough toilets on the ship, so they built an outhouse over the rail. It was so scary to look down and see the ocean!

Epilogue: What I would like people to know about refugees is how grateful we are to have the chance to have a life. The English language is hard. It is not easy to come to a new country and learn a whole new language and way of life, but we are grateful for what we have been given, for the help we have received.

My husband and I have a comfortable life. We have the basics, everything we really need. We are grateful for our lives here in the United States, for having a roof over our heads, food to eat, and children we are proud of. That is what a successful life is to me. Our children have grown up healthy and happy, with good careers. Now my dream is to retire healthy so I can spend time with our grandchildren.