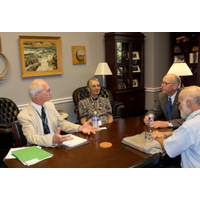 Many among the estimated 230 National Peace Corps Association advocates who participated in our Peace Corps 55th Anniversary advocacy day had no previous experience in the world of Capitol Hill citizen-lobbying. Among them were our October Advocates of the Month, the Ashland, Oregon husband and wife team of Asifa Kanji and David Drury.

For David and Asifa, their Peace Corps experiences were recent and extensive, serving first as 27-month Volunteers in Mali from 2011 - 12 and later signing on as Peace Corps Response Volunteers in both Ghana and South Africa.

Capitol Hill? That was another story.

The couple didn't know exactly what to expect when they signed up to take part. "As first-timers, Asifa and I were a little nervous about it all", said David. "How are you supposed to act around a Senator or Congressperson? What do you say? We didn't want to be an embarrassment to Peace Corps."

That, they were not! And, as Asifa noted, "Whoever would have thought (advocating on the Hill) would be the highlight of my Peace Corps Connect experience."

David and Asifa studied the NPCA briefing papers the night before, and gathered at a church on the morning of advocacy day, joining four other Oregonians who also had little or no advocacy experience. With this in mind, NPCA bolstered the group by connecting them with Pat Wand, a former NPCA Board member and long-time Capitol Hill advocate who had previously lived in Oregon. The first stop was a constituent coffee where the group had a few minutes meeting junior Senator Jeff Merkley, followed by additional time with his staff to make the case for increased Peace Corps funding and better health care support for Volunteers and RPCVs with service-related illnesses or injuries.

Wand got the group started with both of the group's Senate meetings. But then it was time for Team Oregon to split up and meet with their respective members of the House of Representatives. "Oh my, we are on our own!" thought Asifa. "Suddenly, it was my turn to speak to my Republican representative."

In this case, the meeting (pictured above) was with Congressman Greg Walden, a key member of the House Republican leadership. Asifa shared her story of being an immigrant to this country, and how her decision to become a U.S. citizen was very much due to her desire to serve in the Peace Corps. "I have to tell you, I have never been so proud to say I was an American as when I was in the Peace Corps."

Upon sharing she was originally from Tanzania, Congressman Walden noted he had recently visited that country on a congressional delegation (CODEL) with RPCV Congressman and Peace Corps champion Sam Farr. He pulled out his i-phone, shared photos and talked about his CODEL trip.

With a strong connection made, David and Asifa got to the business at hand. As Asifa recalls, "After that it wasn't hard to look him in the eye and with a big smile ask him to co-sponsor H.R. 6037 (Peace Corps health legislation). My husband, who knew that Rep. Walden had worked hard to improve the medical services military vets get, was quick to add that PCVs have served their country too and deserve better care for medical conditions related to their service. The congressman was on board. Wow."

Congressman Walden became one of the first co-sponsors of the legislation. and there is no doubt it was due to the efforts of Asifa and David! The meeting had more than a passing impact, as RPCV Congressman John Garamendi shared the story of being approached later that day on the House floor by Congressman Walden, who wanted to tell him about the meeting with his RPCV constituents.

David was generous in his praise of the NPCA for a successful first-time advocacy experience. "We couldn't have done it without the fantastic support provided by the NPCA staff and advocacy volunteers...The NPCA staff did all the heavy lifting, setting up appointments, providing briefing sheets, and heading up each state delegation with an experienced person who showed us how it should be done. They worked their tushes off* to make us look good. And once you've done it, you see how  satisfying and fun advocacy can be."

We are very proud of our advocates of the month for their highly significant and successful participation on Capitol Hill.

NPCA can continue congressional outreach only with your support. Donate now to the Community Fund to advocate for a bigger, better Peace Corps.