Intimate and Lyrical Poetry by Ukrainian Poet Natalka Bilotserkivets. Her Work Has a New Resonance and Urgency. 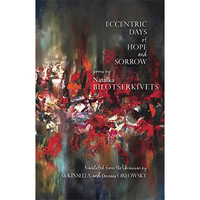 Eccentric Days Of Hope And Sorrow

Translated from the Ukrainian by Ali Kinsella and Dzvinia Orlowsky

Prologue to this collection spanning four decades is the poem “ДІТИ,” or “Children.” It’s a word that readers have seen in photos from Ukraine scores of times since February. Usually it is rendered in Russian, for the benefit of the invaders. Spray-painted on gates to a yard in a village house. In pen on a sign taped to the inside window of a car fleeing rocket fire and shelling. Spelled out in enormous letters at the drama theatre in Mariupol, big enough to be seen from the air, and offered as a plea to Russian forces to show mercy to those sheltering inside.

Which is not to say that this 2021 book of selected poems by Natalka Bilotserkivets is about war. Not explicitly. But it is to say that it is now impossible to read her lyrical works without having them refracted through the lens of an imperial aggressor who wants to erase Ukrainian identity from the face of the earth. Which is also to say how important this collection is now — through its intimate moments as well as in the places where it bears witness to epic events. It arrives as part of the contemporary Ukrainian poetry series published by Lost Horse Press.

It is also to say, as translator Ali Kinsella does in the introduction, that even when Bilotserkivets wrote verse decades ago retelling a fairy tale, as in “The Lame Duckling,” there’s a lesson for a nation finding its place in the world:

Fly alone. Don’t trust even those
happy flocks, proud and young,
that once abandoned you.

Bilotserkivets has been grouped with Ukrainian poets known as the Visimdesiatnyky, or “eightiers.” Born in 1953, she published her first collection, Ballad of the Unconquerables (Balada pro neskorenykh), in 1976, while still a student at Kyiv University. So while she didn’t exactly come of age as a poet in the 1980s, she was part of an “in-between group whose first work came out in the seventies, but who were able to reinvent themselves for the post-Brezhnev era and respond to the zeitgeist,” Kinsella writes. Indeed, it was Bilotserkivets’ 1989 collection November (Lystopad) that earned her wide recognition in Ukraine — in no small part thanks to her poem “We’ll Not Die in Paris.” The fact that L’viv-based rock group Mertviy Piven’ (Dead Rooster) set the lines to music found her wider audiences still.

Five sections compose the book, with poems in Ukrainian and facing English translation. Each section, Dzvinia Orlowsky writes in her translator’s note, “reflects some aspect of Natalka’s spiritual and emotional journey from despair and a sense of foreboding to acceptance and self-transcendence.” There are also moments of bearing witness — as in “May,” Bilotserkivets’ long poem about the Chornobyl’ disaster of 1986. In 2022, as Russian troops captured and then retreated from that very atomic plant — and as the invaders turn Europe’s largest nuclear plant, in Zaporizhzhia, into an atomic hostage, this is a poem that bears revisiting:

Yes, we survived that spring,
until recently, weak
school children appeared, milk damp on their lips,
poets who no longer hurt —
We, passive, inert, and others put out the fire,
the reactor’s red heat;
we in our white robes holding dosimeters,
in police epaulets, in military uniforms,
young pregnant women and girls
with children unborn
victims and rescuers,
in the hot heart of Europe.

IT WAS SERVING AS A PEACE CORPS VOLUNTEER IN UKRAINE 2008–11 that co-translator Ali Kinsella learned Ukrainian; altogether she lived there some five years. Now back in Chicago, for the past eight years she has been translating and publishing essays, poetry, and monographs. With Ostap Kin she translated Vasyl Lozynsky’s chapbook The Maidan After Hours (2017). She won the 2019 Kovaliv Fund Prize for her translation of Taras Prokhasko’s Anna’s Other Days. She also serves as associate director for translation for the Tompkins Agency for Ukrainian Literature in Translation.

Her colleague in the translation is Pushcart prize poet, translator, and a founding editor of Four Way Books, Dzvinia Orlowsky, author of six poetry collections published by Carnegie Mellon University Press, including Bad Harvest, a 2019 Massachusetts Book Awards “Must Read” in Poetry. Her translation from the Ukrainian of Alexander Dovzhenko’s novella, The Enchanted Desna, was published by House Between Water Press in 2006, and in 2014, Dialogos published Jeff Friedman’s and her co-translation of Memorials: A Selection by Polish poet Mieczslaw Jastrun for which she and Friedman were awarded a 2016 National Endowment for the Arts Literature Translation Fellowship.

Earlier this year, Eccentric Days was shortlisted for the Griffin Poetry Prize, for which hundreds of collections were considered. As for the collection’s title, it comes from a line in “Children.” Bilotserkivets’ narrator is addressing about-to-be teenagers on the night when the new millennium dawns. These young people have no time for parents — after all, they are “old, / some over forty.” In this moment, Bilotserkivets’ narrator remembers a time before — her own compatriots’ youth:

Sometimes someone
remembers what we wore and drank
and listened to in cramped cafes
in times of languor — in eccentric days
of beauty, hope, worry and sorrow.

This red fire of dry stalks —
and what dry stalks
and sweet crackling of first rains! —
of fallen leaves that fell for a long time,
warm with currant smoke, or maybe raspberry,
the gentle crunch of branches cut from bushes

slowly unfolded. The ashy edges grew,
and the broken toy the child carried over
and laid at the foot of perhaps its first temple
only smoked through the varnish
of its dirty, wooden side.

O, red fire with the blue, violet eye!
Noon, and then, at once, an evening village —
a child who’s grabbed onto its mother,
dark groves far beyond the river.

Suddenly and everywhere — here
on the quiet, sleepy street, in the dark
groves far beyond the river,
fires blaze up in rays of evening sun
and the smoke of sweet leaves
spread its arms to us.

And when the evening oval faces lit up,
cleansed with sparkling grain and strange delight,
we tossed the child in the air, kissed
and twirled with it — and laughed
as if we, too, were children.

You will never die — in your little blue coat;
your thin lips will never break,
just as this fall evening will never disappear,
this fire that dances and flies into the air.

Can we not rejoice in the happy rhythm
that fills the universe and our hearts?
Can we not catch the divine light
wiping tears, like years, from our faces?

From Eccentric Days of Hope and Sorrow, by Natalka Bilotserkivets, translated from the Ukrainian by Ali Kinsella and Dzvinia Orlowsky (Lost Horse Press, 2021). Reprinted with permission from Lost Horse Press.

Steven Boyd Saum is the editor of WorldView magazine. This article and poem appear in the Spring/Summer 2022 edition.