Mohamud Said: The Main Aim of Peace Corps is to Empower People 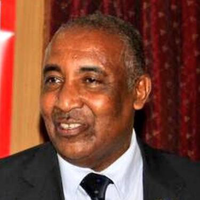 A host country perspective from Kenya. Remarks from the July 18, 2020 global ideas summit: Peace Corps Connect to the Future.

Below is an edited version of his remarks.

Hi everybody, I’m happy to be given this chance to share with you some experiences. I’ll talk about three episodes regarding the Peace Corps. Peace Corps came at the correct time when many countries just gained their independence; the young people who came as Volunteers were disciplined and they really interacted with the community.

The majority of the Volunteers were teachers, and I'm happy to say that most of the people who went through those schools — special high schools — and because of the Peace Corps, they did well in school and they have really served the community. That's the main aim of the Peace Corps: to empower the people.

As the years went on, especially in other fields, what Peace Corps Volunteers did was marvelous. In technical terms, whether in agriculture or in otherwise empowering people, they did a good job. The policy of the American government was seen on the ground; to see and talk to people and exchange ideas is when you learn more about the country. And it came as a cultural exchange: We learned technical fields, and we learned more about American culture and American people.

After the Cold War came another era — the era of terrorism, which really affected the work done by Volunteers in several countries. In some countries, the Volunteers couldn't go too deep in some areas. And as things change, especially in Kenya, they had to be pulled out; that was very sad. That also interfered with the work of the Peace Corps Volunteers.

And now there is a reckoning because of this pandemic. I think this a big a big blow to the Peace Corps itself — especially in Kenya, because we were just planning to bring in new Peace Corps Volunteers. We were ready to receive them, after they were pulled out about seven years ago. They were coming back. And unfortunately, all of a sudden this pandemic came.

Now is a very difficult time, especially for the work of the Peace Corps — because the Peace Corps Volunteers work with communities and interact with communities. With this pandemic, we don't know how long it will take. So unfortunately, that interaction is no longer there. Because when people are living together and working together, they learn from each other — and they learn each other's culture, even how to prepare traditional dishes. We shall miss all that.

How can the Peace Corps change and work from outside the country they're supposed to be in? How can the Volunteers work? It's a big challenge. And I think this we have to look at very critically. I don't see Volunteers coming back to the countries in the near future. So I think the best thing is to plan and see how we can interact. What we are doing now through Zoom most these days — people have learned to communicate. People are working from home; is it possible to give some technical advice from home? That's one thing we should look at.

I hope things which would have changed a long time ago should change now, and people should be respected.

How can we revive or continue with the work that Peace Corps Volunteers were doing? They have left, and I'm sure that local people that are trying to contact them to do some work; it's a continuous train which goes on.

How can we survive during this pandemic? We need to look at ourselves and bring our heads together and see how the work can be done. We have seen it at the national conference taking place. And is it possible, at least to some extent, to carry on with the work we are doing in the stations we were through Zoom?

The other issue is the American situation. Just recently people were really shocked when the [government] said that international students who are there had to come back. I'm very happy that decision was revised. Such decisions sometimes, unfortunately, affect ordinary people who have children there and who are starting their own family; they hope that they will get the education they need in America and then come back. So if all of a sudden they said that "No, because of this pandemic, you have to go back," it becomes difficult.

But also, if I can mention what has happened recently in the States — especially the brutality which is going on: That really affected so many people all over the world. I'm glad that things are being worked out, and I hope things which would have changed a long time ago should change now, and people should be respected.

Dr. Mohamud Sheikh Nurein Said of Kenya is a volunteer, philanthropist, and humanitarian engaged in a wide range of medical service and human rights activities on the local, national, and international levels. He is the 2013 recipient of the Harris Wofford Global Citizen Award.