Lines of Joy and Memory, Death and Rebirth: DEMO by Charlie Smith 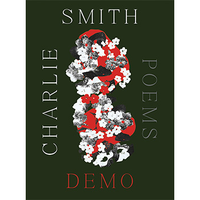 Early on in Charlie Smith’s recent collection comes the poem “Samsara,” lines of joy and memory and death and rebirth. How it begins: “The ocean, uncomfortable with itself, bangs and slurs, / mixing flavors, holding its own against infinity, scarred with ice.” Before it ends, he assesses, “I’ve caught up lately on everything / but time.”

In between, the poem traverses continents and piano concertos, seasons and marriages, plum flowers and the first pear blossoms. The images summoned are in a voice at once exuberant and mournful. Of a wife who once stood “wrapped in a red Navajo blanket / by the doorway of an old hogan on the rez” he laments: “She’s gone now / into the far lands of chaos; sun-shaped molecules, scent of sweet bay.”

Two decades ago, David Kirby wrote for The New York Times that here is a poet who reminds us “that we don’t really know what beauty is until we’ve looked hard at the horror that throws beauty into bright relief.” Carry forward that sentiment into Demo — Smith’s ninth collection of poetry. He has also published eight novels and a book of novellas.

Originally from Moultrie, Georgia, Smith served with the Peace Corps in Micronesia 1968–70. His debut collection, Red Roads, was selected for the National Poetry Series and published in 1987. Five of his books have been named Notable Book of the Year or Editor’s Choice by The New York Times. His writing has appeared in The New Yorker, The Paris Review, Harper’s, and The New York Review of Books, among many other publications.