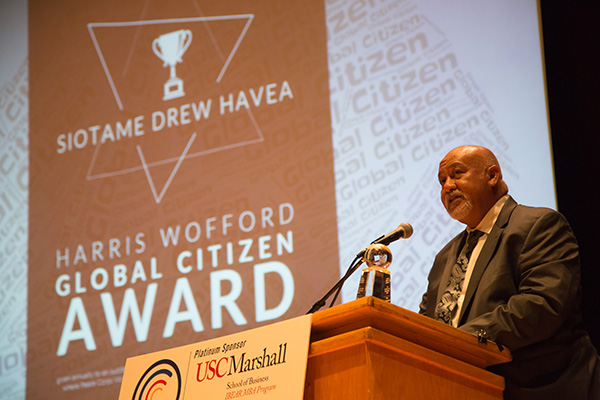 Award presentations reminded conference attendees time and again just how impactful our community is. NPCA’s 2017 Harris Wofford Global Citizen Award, given annually to an outstanding global leader whose life was influenced by the Peace Corps, was presented to Siotame Drew Havea of Tonga for his work supporting Tongan youth, democracy, and civil society. In his acceptance speech, Havea shared that the Tongan name for Peace Corps translates as “workers of love,” because it is impossible to be a Peace Corps Volunteer without “loving the country you work for.”

This year’s Sargent Shriver Award for Distinguished Humanitarian Service was awarded to Kelly Callahan (RPCV Cote d’Ivoire) in recognition of her tireless efforts over 20 years to eradicate Guinea worm disease and blinding trachoma, both considered to be “neglected tropical diseases” that affect the poorest of the poor. Though unable to accept the award in person, Callahan shared a video of her work in Africa that included a direct address to the Peace Corps Connect audience. She closed with a statement anyone of us could make: “When I went into the Peace Corps, I wanted to positively affect one person’s life. It was my life that I positively affected.”

The 2017 Loret Miller Ruppe Award for Outstanding Community Service, an award for affiliate groups, went to First Coast RPCVs of Jacksonville, Florida. Driven by their commitment to the Peace Corps’ Third Goal and guided by strong leadership, First Coast has far exceeded expectations for not only an NPCA affiliate group, but for any organic community organization. This group shines in many areas but particularly in influencing their members of Congress to support the Peace Corps.

Another outstanding Peace Corps community advocate is recognized annually with the Advocate of the Year Award. This year awardee was Suzanne Smith, who serves as both the president of RPCVs of Colorado as well as their advocacy coordinator. According to her father, Smith’s advocacy tendencies started in middle school when she went to the principal and demanded action for another kid who was being bullied.

Outside of NPCA, more awards recognized the accomplishments of Peace Corps Community members. Peace Corps Writers Awards went to more individuals than can be listed here. And returning to the global context in which award presentations started, NPCA's affiliate group Women of Peace Corps Legacy presented Dr. Dee Aker with the Deborah Harding Women of Achievement Award, which honors a woman or group of women with a Peace Corps connection whose contributions have made a significant difference in the lives of women and girls around the world. Dee Aker, PhD, is a psychological anthropologist and conflict resolution professional with over 40 years of experience working in peacebuilding and conflict transformation in international settings. She is truly a role model for the rest of us.

Get more details about NPCA and Peace Corps community awards on the awards page.