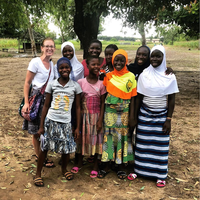 The village of Alibi II is in the center of the country. “It’s basically the Muslim capital of Togo,” Sarah Bair says. Working with a clinic, she focused on maternal and child health, serving some 3,000 people.

“I went to mosque every Friday. I learned a lot about religion and how that affects health — and how to be conscious about health education through religion.” For attending mosque, she wore a headscarf; walking to work, not necessarily. That led to conversations with people in the village about personal choice.

She coached two girls’ soccer teams, practiced twice a week. “One practice I would use for a health talk — washing hands, nutritional eating, setting goals for a healthy lifestyle.”

Before praying five times a day, one should perform ablutions. “Because of that, and everyone having outdoor showers and no one having indoor running water, there would be a lot of standing water between houses and compounds,” Bair says. “Standing water leads to flies, which leads to many diseases — such as a diarrheal diseases.”

Solution: dig a hole by the shower, fill it with rocks and sand, create a way for te water to filter into the ground. Bair worked with a counterpart to get people to construct more than 100 of those in the village. Her job wasn’t to dig; it was to build buy-in.

Then came a phone call at 4 a.m. on Monday, March 16. A friend saying check your email. She had two days to say goodbye. 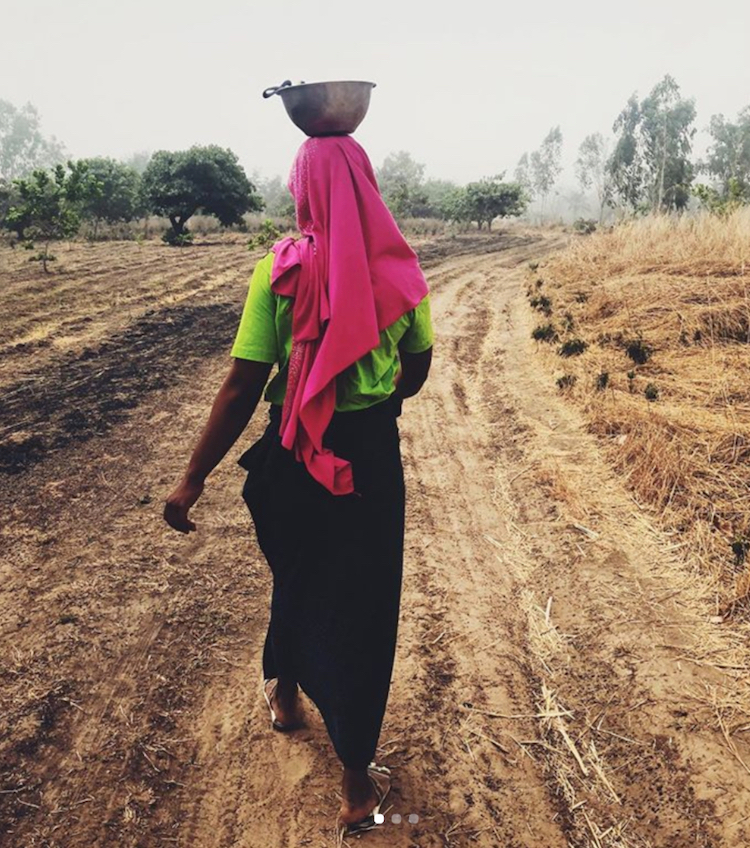 “Reina — my dearest friend in village and arguably the strongest woman I know,” says Sarah Bair. “There are many obstacles women face in Togo including working multiple jobs while also expected to always cook, clean etc. On top of all of this, Reina raises her three kids alone as her husband is working in another country. With the little time she has left to offer, she spends it helping me with health talks and projects in village. The world is a better place because of compassionate women like her!“

She left her cat and the projects and deep friendships, and she knew she’d be carrying the weight of sadness in the leaving — not just for her sake, but also because she’s aware of the fact that Peace Corps hasn’t left Togo since the program was established in 1962.

She wished she’d had the chance to educate her village on coronavirus and imminent health issues. There wasn’t time. She did say this at the clinic: “Remember that health talk we did on washing hands? We really need to reinforce that.”

She didn’t expect that when she told her host family father — also the head of the neighborhood, “a very serious Muslim man” — he began sobbing. Seeing his genuine sadness and the sadness of others was heartbreaking.

Before she left, there was one small thing that a friend insisted on. In Western Africa, many countries have a tradition of protection scars — like a tattoo, where they break a bit of skin but the color wears off in a few months. Bair had been talking about getting one on her foot. “We’ll get it for you now,” her friend said. “We need to protect you before you go where coronavirus is worse.”

She plans to train as an EMT. In August, she began graduate work in public health at Emory University’s Rollins School of Public Health. She keeps in touch with friends in Togo via WhatsApp, “Which makes me both happy and sad,” she says. “They’re always most concerned about how I am. In Togo they say, ‘How are you? How’s the family? How’s your job? How’s the house? How’s your courage?’ They keep asking. They care.”

Medo gbe lo! ŋkɔnye nye Ryan Blackwell alo Kɔkuvi. Wodzim Kuɖagbe. That’s Ewe, a language widely spoken in southern Togo. Translation: “My name is Ryan Blackwell or Kokouvi” — which is what I was known as in my community. It means that I was born on a Wednesday.

I just got back from serving for almost three years as an English and gender education volunteer in Togo. I also worked a bit with Pathways Togo, a Peace Corps-affiliated organization that provides full scholarships all the way through university for outstanding female students. 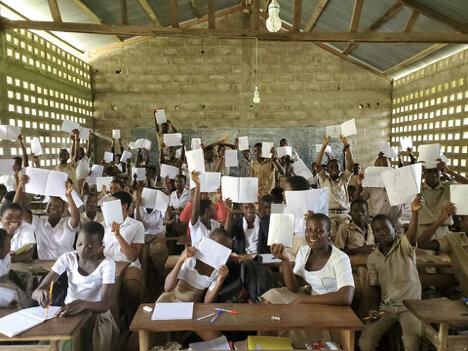 A thousand words: 8th-grade English students show off the monsters that they drew and described to celebrate Halloween in Adeta, Togo. Photo by Ryan Blackwell

I had to leave my colleagues, my friends, my neighbors, and my students. I’ve never felt that connected to a community in my life.

In terms of unfinished business: We need to get the Peace Corps opened up again as soon as possible. Peace Corps Togo staff — Togolese and Americans — are doing incredible work, especially supporting Togo’s education system and girls’ education in the country. I can’t really put into words how grateful I am for being able to be a part of the Peace Corps and being able to work there.