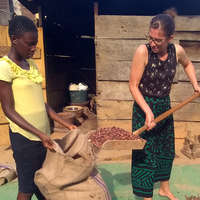 I was serving as a Peace Corps Health Extension Volunteer in southern Ghana, in a farming community of about 1,200 people. When we were evacuated, I had been in my community for a year and had one more year to go. I was the first Peace Corps Volunteer there. I felt like I was just starting to hit my stride, to identify the projects that would be truly helpful and the people who were the most committed to working together for the long term. I was working with community members on a health education class, household latrines, and a school library. We were starting to plan a snail farming project and a rainwater harvesting initiative.

What did I leave behind?

I left behind giant papayas and a little fruit called “alakye,” with bright red flesh that tasted like a sour plum and a peel that oozed rubbery latex sap. I left behind silvery dried fish, red palm nuts, and sweaty heat. I left behind a garden I’d just planted — cucumber, watermelons, basil, peanuts — and the concrete bedroom I’d finally painted green. I left behind delightful TV commercials with identically dressed dancers, and an ongoing “Coke famine” in which the only kind of Coca-Cola available anywhere was Coke Zero. But mostly, I left behind people — hundreds of people I saw almost every day. Friends I planted rice with and chatted with in the hot afternoons, friends I washed clothes with and laughed with, friends who asked me uncomfortable questions about America. Old people, babies, taxi drivers, traditional midwives, rice vendors, church pastors. My twelve-year-old neighbor who passed by my house every morning on her way to school, her books stacked neatly on her head.

I had to leave a lot of things unfinished.

Every Sunday evening, I led a community health education class. The class was open to anyone who wanted to come, and every week, the people decided together what they wanted to learn about the following week. I would research the topic and plan a lesson with help from Ghanaian friends, and one of them would interpret for me during the meeting. People were so curious about health and the human body, but information wasn’t always available; even for those who could read English (the language of education in Ghana), my community didn’t have access to phone data, much less health books or a library.

We studied malaria, breastfeeding, hernias, the female and male reproductive systems. One person asked “Why do women sometimes die during childbirth?” That led us into a whole series of classes about pregnancy, labor, and birth. People asked good questions. “When is the fertile time in a woman’s menstrual cycle?” “Is it dangerous if a pregnant woman works too hard on the farm?” “I once saw a baby boy who was born without testicles in his scrotum. What causes that?” Every week, I was impressed with how much people remembered from the week before.

People were so curious about health and the human body, but information wasn’t always available; even for those who could read English (the language of education in Ghana), my community didn’t have access to phone data, much less health books or a library.

We played games, did skits, invented little cheers. I made giant drawings and blew up balloons to represent internal organs. The class even developed their own greeting: Every week, when people arrived, they would call out “Apɔmuden” (“Health”), and those who were already there would respond “ɛhu hia paa!” (“It’s very important!”). The last class I led, on March 15, was about natural family planning, and the topic the people requested for the following week was sexually transmitted infections. I had expected that I’d have many more months to brainstorm with my counterparts on how the community could continue learning about health after my service was over, but unfortunately we didn’t have time to do that before the evacuation.

We were also working on lots of other projects that I wasn’t prepared to leave behind. I had helped coordinate my community’s involvement in a household pit latrine project, and we’d finally finished 87 latrines a few days before I left. But because of high groundwater, about 50 households hadn’t qualified to build them. I had been doing research on different latrine designs, hoping to help those people find an alternative type of latrine that would work where they lived.

I was working with a teacher in a neighboring community who was interested in starting a school library, which would have been the first in the area. Together we identified possible sources for books in English and Twi (the local language), and ways to raise money in the community, but that was as far as we’d gotten when I was evacuated. The teacher plans to continue on his own once school reopens after the pandemic. 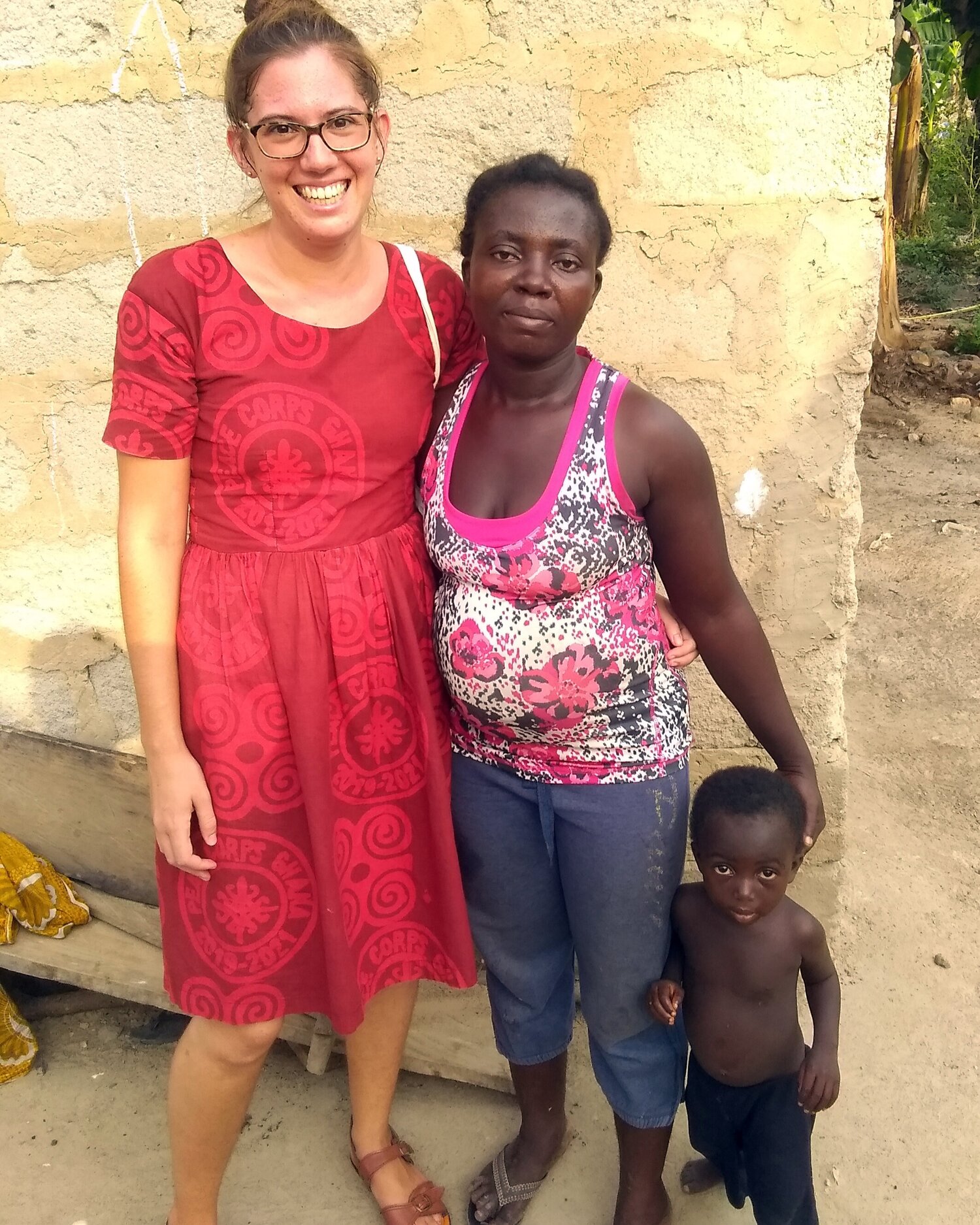 I was also planning to work with one of my neighbors on snail farming. Giant snails are eaten as a delicacy in southern Ghana, and a Peace Corps friend had taught me a simple way to make a snail enclosure out of used tires. My neighbor, already a beekeeper, was excited to try this out and teach it to others, giving households a nutritious protein source, and extra income from selling the snails. We were going to start in May, once the rainy season arrived.

And I was working on a drinking water problem. Many people in my community drank water from a local river, because even though we had wells and pumps, the groundwater that came from them was salty — our geological bad luck. Most people felt the river water was fine to drink; they said it tasted fresh and didn’t make them sick. But just a few weeks before I left, I had an exciting conversation with one of my neighbors. My Twi was just starting to be good enough that he and I could finally communicate well, in a mixture of Twi and English. It was the height of dry season, and we were standing next to the river, which was down to a trickle. My neighbor told me he felt the river water was dangerous to drink, because of contamination from the agrochemicals that farmers used upstream. He told me he wanted change, he wanted everyone to have better water, but he didn’t know what could be done. I suggested that we could help the community set up rainwater collection and storage systems, and he loved the idea. We were just about to start planning how to do this when I had to leave.

Peace Corps work is so powerful because it’s work we do together with our communities, based on their priorities. It’s work that can become sustainable as we share knowledge and learn together.

I think Peace Corps work is so powerful because it’s work we do together with our communities, based on their priorities. It’s work that can become sustainable as we share knowledge and learn together. And it’s work that includes living our daily lives with our host country friends and neighbors. I hope that after the pandemic, I’ll be able to continue this work with my community in Ghana — or that if I can’t, a future Peace Corps Volunteer will.

Two days before I left my community, the power went out for the evening. I joined my neighbors outside their house, where the kids and I lay on a comfortable mat, looking up at the stars and enjoying the cool breeze, and their parents relaxed on a wooden bench. I asked them if they knew any folk tales. My friends and their children started telling stories one after another — funny stories, stories I couldn’t understand at all unless I made someone repeat them word by word, half in English. Soon I gave up on trying to understand and just listened to my friends laugh together. But I think if I had been able to stay another year, I might have understood enough to laugh with them.