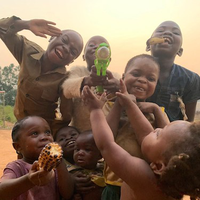 In the earliest hours of the morning, when the air is still somewhat cool, the sun brings with it the sounds of roosters calling and the cries of baby goats, indistinguishable from the cries of baby humans. The mosquito net slightly filters the incoming light as I rise up from the rectangular piece of foam on which I sleep. Furniture here needs to be made by the village carpenter; I still don’t have a bed frame. Calvin the kitten jumps onto my lap and meows loudly to tell me that he needs sardines right now.

The children here are resourceful geniuses. They build skateboards and scooters out of wood and rusty nails they find. Calvin’s empty sardine boxes become little cars pulled on bits of string. The kids play outside, shoeless, shrieking in French and Kako and Fulfulde. 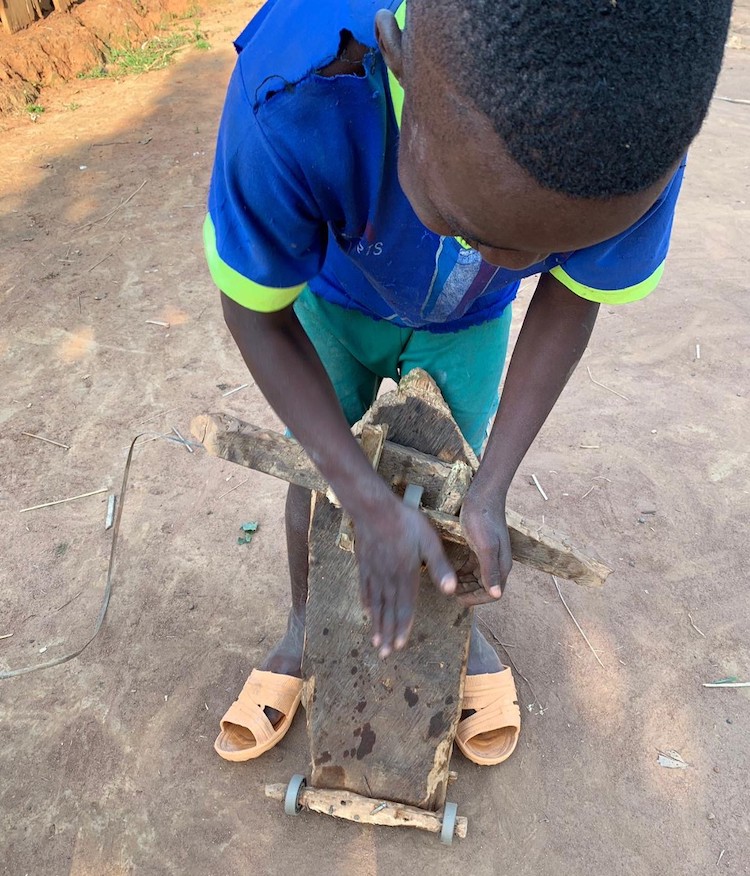 “The children here are resourceful geniuses.” Photo by Sasha Kogan

I work on my Community Needs Assessment, a seemingly endless document due in the beginning of March to collect and analyze data about village resources and health problems. I have learned through home visit questionnaires, community relay workers, and health center and village chiefs that the women here usually start having children at 14; that people rarely know the importance of using condoms; that babies often die from malaria; and that there is a lack of vegetables causing intense problems with malnutrition in children. I have also learned that the women are some of the strongest people in the world and share whatever they have without question. That when I am being harassed by men or if I shed a few tears missing home, I am immediately protected, supported, and loved. Though I am often alone here, I have never been lonely.

Trying to describe New York to people here is almost as difficult as describing this place to Americans. I shift between the two worlds, both alien planets to each other, both different versions of normal to me now.

This village is 900 people in 200 houses made of mud slathered onto a frame of sticks and topped with roofs of palm fronds. The road is compact earth, which smothers the leaves in red-brown dust every time a car passes by. The surrounding jungle is a dense and leafy ecosystem where hunters bring back whatever meat they can find: deer, monkey, lizard, pangolin. Night falls fast, the same time every day all year round, bringing with it an intense scattering of stars. They ask why I look up so much, and I try to explain in my broken French the idea of light pollution back home. But trying to describe New York to people here is almost as difficult as describing this place to Americans. I shift between the two worlds, both alien planets to each other, both different versions of normal to me now.

I wake up in the middle of the night from vague and dark dreams, shifting figures of the people from my village in my field of vision but frustratingly out of reach. Mama Jean cries soundlessly, the same tears the day I left. The children are playing happily together, but never seeing me, even as I try to reach out to them. I wake up feeling a physical ache in my chest.

Only one member of my village has WhatsApp, the chief of my health center. Sometimes he sends a brief voice message from people I miss the most. I cling to every word. I play them over and over again just to hear their voices. Sometimes he will FaceTime me, though the service is so delayed I can only see a pixelated version of his face. But the chief and his smartphone are leaving the village soon, and my one broken connection to the world I knew will be lost.

The chief and his smartphone are leaving the village soon, and my one broken connection to the world I knew will be lost.

My time in Peace Corps was brief: six months in country, three months in village. There are not enough words to express the gratitude I feel for the time in Cameroon. Although it was sooner than expected, it’s important for me to be in America right now. I have seen the power of small and local changes in Peace Corps. And I am seeing how people in the States are mobilizing and calling for changes that are long overdue in this country. I feel hopeful that America can truly change, through grassroots movements the likes of which I have never seen. One day I will return to Cameroon. For now, there is more than enough work to do here.