In Papua New Guinea, Seeking to Understand Community — and an Act of Horrific Violence 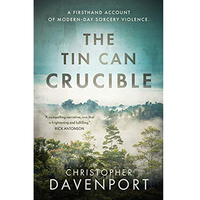 The Tin Can Crucible

The Tin Can Crucible is a fascinating account of how Christopher Davenport is inculcated into the customs, morals, values, and way of life in a village where he trains for his teaching assignment in Papua New Guinea, where he served as a Volunteer 1994–96. He documents the process that leads him to comply with the customs of his new family. The process is so complete that Davenport comes to accept what would be in his previous life a reprehensible act: After a venerated elder dies, villagers kidnap, torture, and ultimately murder a woman they accuse of witchcraft.

Descriptions of the environment are beautiful — especially the dense forests in the New Guinea highlands. And as different as life in the village is for Davenport from what he has known, he draws out the common human traits his hosts share with him and others. At the same time, this is a book that revolves around a horrendous act that demonstrates the gulf between cultures. “In their capacity for endless patience and remarkable kindness, as well as unspeakable brutality,” he assesses, “I came to recognize the complexity, the frailty, and even the humanity, of the people with whom I was living.”

Davenport serves with the State Department — work that has taken him to Vietnam, Guatemala, Tajikistan, and elsewhere.

This review appears in the special 2022 Books Edition of WorldView magazine. It is adapted from a review originally published by Peace Corps Worldwide.

Leo Cecchini served as a Volunteer in Ethiopia 1962–64.