For “Hardball” Host Chris Matthews, a Life in Politics Began with the Nixon-Kennedy Battle in 1960 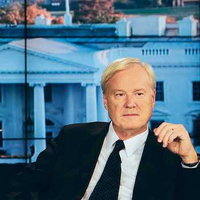 My Life in Politics and History

“I suppose everyone has a moment that wins them over to a lifelong enthusiasm,” Chris Matthews writes early on in This Country. “For me, it was the 1960 battle between Vice President Richard Nixon and Senator John F. Kennedy that got me truly excited about politics.” Matthews was 14, and from an Irish Catholic family in Philadelphia. He fell hard for JFK — at first. But his was a Republican family. Come GOP convention time, young Chris had swung around to his father’s point of view: Nixon was the one for peace, experience, and prosperity.

The arc of Matthews’ career is well known: host of the political show “Hardball” for two decades, and years before that a speechwriter for Jimmy Carter and aide to House Speaker Tip O’Neill. Like many who came of age in the 1960s, Matthews was profoundly changed by the decade. Bookends in this “I was there” memoir: As a senior in high school, he writes the State Department to ask why, in 1962, the U.S. is getting involved in Vietnam. The answer he gets back: rice. “I had thought this war was being fought to stop the spread of global Communism,” he writes.

Six years later, in June 1968, he is working on a Ph.D. in economics at the University of North Carolina. His graduate student deferment has expired, his 1-A draft status looms large. “I sat alone on a public park bench in Montreal a block up from Sainte-Catherine Street and decided where I was going to go in my life … I now listed on the back of an old business card my limited options regarding a war I opposed. I could join VISTA, the domestic volunteer program; teach high school; or enlist in the army as a public information officer …  Finally, there was another option; a truly positive one.

“It carried the advantage of being a true adventure: the Peace Corps. The challenge was to get the right assignment. For me, that meant going to Africa and working on economic development.”

Serving with a serious commitment to help the Swazi people made Volunteers unpopular across the border. “The South African ‘apartheid’ government wouldn’t even let us enter its country,” Matthews writes. “Soon after we arrived, a commentator on official South African radio derided us as ‘do-gooding intellectuals.’”

Matthews served as a Volunteer 1968–70 in the nation then known as Swaziland, now as Eswatini, working with traders to teach bookkeeping and marketing. “We all took our jobs seriously. This commitment to help the Swazi people made us especially unpopular across the border. The South African ‘apartheid’ government wouldn’t even let us enter its country. Soon after we arrived, a commentator on official South African radio derided us as ‘do-gooding intellectuals.’”

Matthews returned to the States after two years and headed for Washington, D.C., intent on making a career in politics. He worked as an aide and on campaigns, in policy, and in advocacy. He made a quixotic bid for Congress, announcing that he would not take outside funding. After working for the White House and the Speaker, he found his métier in writing about politics as a columnist for the San Francisco Examiner and later the Chronicle. He covered the Good Friday peace accords in Ireland, the fall of the Berlin Wall, the first elections in post-apartheid South Africa. Those moments in history whisk past here. As for how Matthews recounted them, he offers this take: “The great Washington Post editor Ben Bradlee best captured the personal excitement in my writing. ‘Matthews writes about politics with relish,’ he once observed, ‘the way sportswriters cover boxing.’”

He began hosting the show “Hardball” on CNBC in 1997; a couple of years later the show moved to MSNBC. As television commentary began to command more of Matthews’ time, he wound down the gig with the Chronicle. His final column was in 2003, in the run-up to the U.S. war against Iraq. “I oppose this war because it will create a millennium of hatred and the suicidal terrorism that comes from it,” he concluded. “Maybe it’s the Peace Corps still in me, but I don’t think we win friends or — and this is more important — avoid making dangerous enemies in the third world by making war against it.”

Matthews’ stint hosting “Hardball” ended when he announced in March 2020 that the broadcast would be his last. A few days before, a report had surfaced from four years prior about remarks he had made about a “guest’s appearance as she was being prepared in the makeup chair,” he writes in this memoir. “It never occurred to me to deny that it had happened or condone what I’d said.” He was 74 and decided it was time to retire from the show.

Along with the 1988 volume Hardball: How Politics Is Played, Told by One Who Knows the Game, Matthews has written biographies of RFK and JFK, as well as Tip and the Gipper: When Politics Worked and Kennedy & Nixon. As for the place Peace Corps has played along the way: “So much of my life has arisen from that decision. Those two years of service as a trade development officer took me to a wider world. It allowed me to view my country at a distance. It opened me to a common humanity with people whose lives were separated from us by continent and culture.”

This review appears in the special 2022 Books Edition of WorldView magazine. Story updated May 2, 2022.