The Swan Song that Truman Capote Did Not Intend to Write 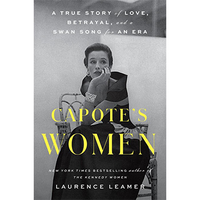 Capote’s Women: A True Story of Love, Betrayal, and a Swan Song for an Era

“For years, Truman Capote had been proudly telling anyone within hearing that he was writing ‘the greatest novel of the age,’” begins Laurence Leamer’s latest biography, a tale of the literati and glitterati. Capote’s book “was about a group of the richest, most elegant women in the world. They were fictional, of course … but everyone knew these characters were based on his closest friends, the coterie of gorgeous, witty, and fabulously rich women he called his ‘swans.’”

Following publication of Breakfast at Tiffany’s and In Cold Blood, Capote was a writer of renown, feted and admired. Among those he befriended and who took him into their confidence: Barbara “Babe” Paley, Gloria Guinness, Marella Agnelli, Slim Hayward, Pamela Churchill, C.Z. Guest, and Lee Radziwill (Jackie Kennedy’s sister). But Capote also suffered serious writer’s block, never completing his magnum opus, Answered Prayers, that he was sure would deserve a place beside Proust and Wharton. He only managed to complete and publish a few chapters in Esquire in 1975. When Capote’s authorized biographer, Gerald Clark, read the excerpt pre-publication, he was alarmed that the women would recognized themselves immediately. “Naaah, they’re too dumb,” Capote told Clark. “They won’t know who they are.”

Laurence Leamer has written here a story of betrayal. And it’s a story of failure — a swan song not at all like the one Capote intended — by a great American writer who found “nothing in love was too bizarre for his scrutiny.”

Bestselling author Leamer has indeed written here a story of betrayal. And it’s a story of failure — a swan song not at all like the one Capote intended — by a great American writer who found “nothing in love was too bizarre for his scrutiny.”

Leamer himself served as a Volunteer in Nepal 1965–67, “where I had a remote placement two days walk from a road,” as he told Peace Corps Worldwide. Leamer went on to cover the war in Bangladesh for Harper’s, and his journalism has appeared in The New York Times Magazine, New York, Playboy, and elsewhere. He drew on his knowledge of Nepal for Ascent: The Spiritual and Physical Quest of Legendary Mountaineer Willi Unsoeld. But he has no doubt become best known for tales of the wealthy and powerful in book form that include Make-Believe: The Life of Nancy and Ronald Reagan; a trilogy on the Kennedys; Fantastic, a biography of Arnold Schwarzenegger; and Madness Under the Royal Palms, telling the secrets and scandals of South Florida. A deeper dive into one of that area’s most famous denizens appeared in 2019 — Mar-a-Lago: Inside the Gates of Power at Donald Trump’s Presidential Palace — a book, Leamer says, “written with all I know about Palm Beach after living there for a quarter-century and all I know about politics and human personality after a lifetime as a writer.”

Over the years, Leamer has also turned his sights on projects that have had a profound effect on the wider world. The Lynching: The Epic Courtroom Battle That Brought Down the Klan, earned a place on must-reads lists by Oprah Winfrey and Tavis Smiley. For The Price of Justice, he went undercover to work in a West Virginia coal mine and told the story of two lawyers’ struggle against Don Blankenship, “the most powerful coal baron in American history. Blankenship was indicted and sent to prison,” Leamer notes. “People in West Virginia will tell you it would not have happened without The Price of Justice.”