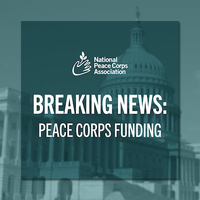 On July 28 the House of Representatives approved a $430.5 million Peace Corps budget for 2022 — an increase of 5 percent. It points to the first meaningful increase in funding in six years.

(UPDATE – July 28, 2021, 9:00 PM Eastern): On a mostly party-line vote, the House of Representatives approved a Fiscal Year 2022 spending package for the Department of State and other foreign operations. Included in the $62.2 billion State/Foreign Operations bill is a $20 million funding increase for the Peace Corps — nearly 5 percent. The Senate has not yet taken up its version of a State/Foreign Operations spending bill.

The package was approved on a 32–25 party line vote. It will next head to the full House of Representatives — at a date yet to be determined — for further debate and voting.

No similar action has been taken yet by the Senate Appropriations Committee in advancing its version of the State/Foreign Operations spending plan for the fiscal year that begins October 1, 2021.

(UPDATE – June 28, 2021, 8:30 PM Eastern): On a voice vote, the House Appropriations Subcommittee for State/Foreign Operations approved a $62.2 billion international affairs budget for Fiscal Year 2022. This represents a 12 percent, $6.7 billion increase over the current fiscal year. Included in this budget is $430.5 million for the Peace Corps, a $20 million increase over current funding. In brief remarks, Subcommittee Chairwoman Barbara Lee (D-CA) referenced the Peace Corps as one of several programs that will provide “needed humanitarian assistance” around the world. No amendments to the bill were made, but that could possibly change when the full Appropriations Committee considers this funding package on Thursday morning.

The House of Representatives Appropriations Subcommittee for State/Foreign Operations had recommended a Fiscal Year 2022 funding package that includes $430.5 million for the Peace Corps.

This recommendation represents a $20 million increase — nearly 5 percent — in funding for the agency for the fiscal year that begins October 1. A subcommittee vote on this recommendation is expected on Monday evening. Should this figure be eventually approved, it would mark the first meaningful funding increase for the agency in six years. That’s good news for the Peace Corps.

“The Peace Corps is on the way back,” says Glenn Blumhorst, President and CEO of National Peace Corps Association, upon learning the news.

“The Peace Corps is on the way back,” said National Peace Corps Association President and CEO Glenn Blumhorst, upon learning the news. “This recommendation by the State/Foreign Operations Subcommittee reinforces congressional support — not only for the robust redeployment of Peace Corps Volunteers — but the importance of providing the agency with funding that will allow for many improvements and reforms that will build a stronger program for the next generation of volunteers. Our community needs to stay engaged to make sure this strong commitment by the subcommittee is advanced.”

Updated July 1, 2021 at 2 p.m. Return to this post for updates this week on actions and reactions on FY 2022 Peace Corps Funding in the House of Representatives.