Breaking News: President Biden Announces that He Will Nominate Carol Spahn to Lead the Peace Corps 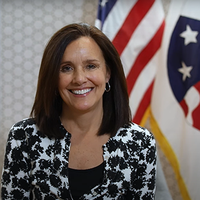 Carol Spahn has led the agency during a challenging time in Peace Corps history. On Wednesday, President Biden announced that he intends to nominate her to serve as the 21st Director of the Peace Corps.

In a release issued by the White House on April 6, President Biden announced that he intends to nominate Carol Spahn to serve as Director of the Peace Corps. She began serving as acting director in January 2021 and has led the agency for the past 14 months, one of the most challenging periods in Peace Corps history. Just weeks ago the first Volunteers began returning to service overseas in Zambia and the Dominican Republic, and Volunteers are expected to return to more than 20 countries in the months ahead.

“We congratulate Carol Spahn for her pending nomination as Peace Corps Director, and applaud President Biden for his choice,” said National Peace Corps Association President and CEO Glenn Blumhorst. “NPCA has been honored to work with Carol and her strong leadership team over the past year on collaborative efforts to navigate this difficult period of planning for the Peace Corps’ new future. We have full confidence in Carol’s commitment to return Volunteers to the field in a responsible manner, and offer the next generation of Volunteers a better, stronger Peace Corps ready to meet the global challenges we confront. The continuity of this work is key, and we urge the Senate to swiftly bring forth this nomination for consideration and bipartisan confirmation.”

Prior to serving as acting director, Spahn served as chief of operations in the Africa Region covering Eastern and Southern Africa, and before that, served a five-year term as country director of Peace Corps Malawi. Her Peace Corps roots extend back to her service as a small business advisor in Romania 1994–96. She has more than 25 years of experience in international development, business, health, and women’s empowerment including work with Women for Women International — which supports female survivors of war — and Accordia Global Health Foundation — which helps fight infectious disease in Africa.

Last year, under Spahn’s leadership, the agency created a domestic service initiative for only the second time in Peace Corps’ history, working with the Federal Emergency Management Agency (FEMA) to support vaccination campaigns across the United States. The Peace Corps also continued to expand the Virtual Service Pilot, a program launched in late 2020 to match returned Volunteers with partner organizations around the world.

During the past year, some of the agency’s longstanding shortcomings were also brought into focus. One pair of articles by USA Today delved into how the agency has not adequately addressed sexual assault of Volunteers — a problem going back years. After the first of those articles appeared in May 2021, Spahn ordered a five-year review by the independent Sexual Assault Advisory Council. Shortly after that report was completed, it was made public by the agency in fall 2021. Drawing on recommendations that report provided, in March 2022 the agency released a briefing paper and roadmap for how to better address sexual assault reduction and response.

In December 2021 and January 2022, USA Today also published a pair of articles on the highly disturbing killing in 2019 of Rabia Issa, a mother of three in Tanzania who was struck by a car driven by a Peace Corps official. Both the actions of that staff member and the agency’s response sent shock waves throughout the Peace Corps community. Carol Spahn spoke to Peace Corps staff about this tragedy during a global town hall meeting in January. From staff and the wider Peace Corps community the agency has heard calls for greater transparency going forward — and that the agency live up to its ideals.

Spahn has said on multiple occasions that the pandemic has underscored just how vital the mission of the Peace Corps is. “The pandemic has set back years of development progress and produced unprecedented challenges,” she said last October at a House Foreign Affairs Committee hearing. “It has also underscored our world’s profound interdependence and shared future. Recovery will require international cooperation not only at the government level, but also at the community level. And that is where the Peace Corps as a trusted community partner will return to service in new and time tested ways.”

“Intercultural competence, diversity, equity, inclusion is at the core of who we are as an agency and what we do. Our approach encourages deep humility and builds transferable skills as our staff and Volunteers partner at a grassroots level with people from 64 different countries.”
—Carol Spahn

Spahn also told the committee that during the suspension of Volunteer service overseas the agency has redoubled its commitment bolster support systems for Volunteers and, crucially, to ensure that a focus on intercultural competence, diversity, equity, inclusion, and accessibility (ICDEINA) within Peace Corps is a top priority. “Intercultural competence, diversity, equity, inclusion is at the core of who we are as an agency and what we do,” Spahn said. “Our approach encourages deep humility and builds transferable skills as our staff and Volunteers partner at a grassroots level with people from 64 different countries.”

At those hearings, House Foreign Affairs Committee Chairman Gregory Meeks praised Spahn and her leadership team for their work to advance ICDEINA within the agency. And, he noted, his examination shows that the Peace Corps is ahead of many other federal agencies in this regard.

In March 2022, as part of Peace Corps Week — marking the March 1 anniversary of President Kennedy’s executive order establishing the Peace Corps in 1961 — the agency hosted a community forum and announced the first countries to which Volunteers would begin returning to service in 2022. The forum also highlighted further details on ICDEINA plans, including additional staffing to address key issues, expanded training for worldwide staff and future Volunteers, reforms to reduce economic barriers to service, and more.

Should Spahn receive approval from the committee, her nomination will go to the full Senate for a final confirmation vote.