He Started Out Selling Soap. And Went On to Found the Campaign for Tobacco-Free Kids. 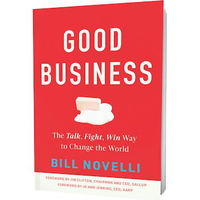 The Talk, Fight, Win Way to Change the World

Bill Novelli’s career includes serving as CEO of AARP, founding the Campaign for Tobacco-Free Kids, leading the humanitarian organization CARE, and establishing global PR agency Porter Novelli. He teaches in the MBA program at McDonough School of Business at Georgetown University. In Good Business, he offers lessons on life and leadership.

He got his start in the corporate world with Unilever, selling soap. Next stop: a New York ad agency, where he sensed a kind of social relevance to the work — sometimes. “The turning point came the day I returned from a client meeting with two test products in plastic bags, one a new kids’ cereal and the other a new soft, extruded dog food. A young copywriter came into my office, announced that he was working on ad concepts for the cereal and asked to see the product. As a joke, I pulled out the dog food and tossed it to him. Without much of a glance, he caught it and said, ‘Yeah, we can sell that.’”

Novelli took on a new client: the Public Broadcasting Service, seeking to build viewership. A while later he saw an ad in The New York Times that the Peace Corps, about a decade after its founding, was looking to reposition itself and seeking marketing expertise. Host countries “wanted more older and experienced Volunteers (nurses, agriculturalists, MBAs) and more people who looked like the citizens of the countries in which Peace Corps Volunteers served,” he writes. A headhunter whom Novelli called tried to steer him to a gig with Avon; no, Novelli said — Peace Corps.

“The other side of the equation is to be bigger than ourselves and go beyond our own personal interests and needs — to care about our communities, our country, and future generations.”

“Today there are nearly 250,000 Returned Peace Corps Volunteers and former staff, many of them, like me, members of the National Peace Corps Association, acting in support of the organization and its work,” he writes. (Hear! Hear!) While working on PR for the agency, Novelli conducted a survey of returned Volunteers. He notes that when he asks current Georgetown students (some RPCVs) “what they think returning Volunteers’ main concern was, they often guess it was about getting a job or fitting back into American society. But the biggest concern back then, and I feel certain it remains so today, was the fear that the sand would blow over their tracks and that all their hard work in the country where they had served would disappear. This fear was well founded, as I learned later in my work for CARE.”

Novelli chronicles two ethical lapses in his own career — not coincidentally, after he moved from the Peace Corps to Pennsylvania Avenue and the November Group, an ad agency formed in 1972 with one client and one purpose: Keep Richard Nixon in the White House. “We were housed in the same space as the Committee to Re-elect the President, which became known as CREEP. A lesson here: watch what names spell out in acronyms.”

Novelli serves his tale with dashes of humor. He also asks some big questions — about society, the environment, and more — particularly in the last chapter, “What Do We Owe Our Grandchildren?” Personal responsibility is part of it, he notes. “But the other side of the equation is to be bigger than ourselves and go beyond our own personal interests and needs — to care about our communities, our country, and future generations.”