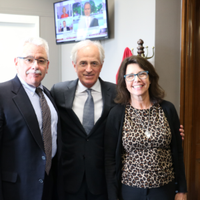 The parents of Nick Castle, who died while serving as a Peace Corps Volunteer in China, trace how they began their ongoing work to ensure that Peace Corps lives up to the ideals that their son believed in.

By Sue and Dave Castle

Sue and I never thought of becoming involved in politics or advocacy until our son Nick died while serving as a Peace Corps Volunteer in China on February 7, 2013.

Nothing could have been further from our minds.

For all of you who have suffered a significant loss of a loved one, you can understand grief and pain. There is no preparation for the loss of your child.

After considerable effort to get the facts and determine how Nick could have died while being cared for by a Peace Corps Medical Officer, we became committed to making sure no other family would have to lose their child, parent or sibling due to medical incompetence and negligence.

Our reform efforts began almost four years ago to change the culture of the Peace Corps and re-define the medical services provided to volunteers.

So where do you begin?

We began by reaching out to our Senators in California: Senator Boxer and Senator Feinstein. And we didn’t begin with a direct phone or in-person conversation with our Senators.

We had no experience in lobbying. One of the early lessons learned is if you are willing to give up and go away no one is going to stop you. But if you are persistent, continue to write and call Congressional offices, people begin to recognize you are serious and committed to addressing a problem.

You also must have some suggestions for your Congressional representative as to what is needed to improve the current condition.

Putting a face and a voice to the cause is so important to advancing your efforts. That is something that cannot be duplicated in an e-mail or phone call.

It is not always about a political party either. We are not constituents of the two most significant Congressional people who offered their help and committed to our efforts. It happens to be two Republicans: Representative Ted Poe and Senator Bob Corker. Their involvement comes from realizing a need for the Sam Farr and Nick Castle Peace Corps Reform Act of 2018.

This, along with the partnership with the National Peace Corps Association, has made our goal a reality. There are countless individuals who have worked towards seeing this bill pass through Congress. We are almost there. We realize this bill does not include all the issues currently affecting Peace Corps Volunteers, mainly raising the disability rate from GS7 to GS 11; however, we remain committed to working for reform. This bill is just the first step.

To promote world peace and friendship by fulfilling three goals:

To help promote a better understanding of other peoples on the part of Americans.

To be supportive, show compassion and advocate for Volunteers who may have had a different experience.

The Fourth Goal was started by us to create awareness of healthcare issues and act as a resource for volunteers and their families. We are in the infancy stage of developing this organization. There is a need to advocate and support Peace Corps Volunteers who return from service with issues not easily remedied by traditional Peace Corps resources. We hope to be able to work with Peace Corps on policy and with Congress to develop legislative measures. We hope to work with current and RPCVs to identify not only areas of concern but also positive experiences to learn from and share.

We have learned that two voices are more powerful than one. Imagine what can be done with a thousand voices.

Connecting with another human being face to face with honesty and sincerity makes a difference.

Doing something because it is the right thing to do. Isn’t that what the Peace Corps is all about?

Write to your members of Congress urging final passage of Peace Corps health/safety legislation and adoption of the House version of the bill, while also noting more work needs to be done in the future to address the needs of Returned Peace Corps Volunteers who come home with service-related illnesses or injuries.

The opinions expressed in this article are those of the author. They do not purport to reflect the opinions or views of the National Peace Corps Association or its members.