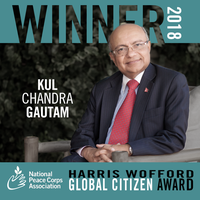 National Peace Corps Association is pleased to announce that the winner of the 2018 Harris Wofford Global Citizen Award is Kul Chandra Gautam of Nepal. The Harris Wofford Global Citizen Award honors an outstanding global leader who grew up in a country where Peace Corps Volunteers served, whose life was influenced by Peace Corps, and whose career contributed significantly to their nation and the world in ways that reflect shared values in human dignity and economic, social, and political development. It is the highest honor bestowed upon a global leader by National Peace Corps Association (NPCA).

Upon hearing the news Mr. Gautam expressed, "I am thrilled and most grateful for this honour of being awarded the 2018 Harris Wofford Global Citizenship Award from the National Peace Corps Association. My experience with the Peace Corps has been a source of great inspiration for me from my early student days in Nepal and throughout my long career with the United Nations in the service of the world's poor and disadvantaged, particularly women and children. This prestigious award will further motivate me to continue to dedicate the rest of my life to pursue the core Peace Corps values of service, peace, development, human rights and global human solidarity."

Mr. Gautam is a distinguished diplomat, public policy expert and peace advocate. Currently, he serves on the Boards of several international and national organizations, charitable foundations and public private partnerships as chairman, member or advisor. Previously he served in increasingly senior managerial and leadership positions with UNICEF in several countries and continents in a career spanning over three decades. He rose to become Deputy Executive Director of UNICEF and Assistant Secretary-General of the United Nations, the highest-ranking Nepali in the UN system in early 2000s.

After retiring from the UN, Mr. Gautam was briefly Special Advisor to the Prime Minister of Nepal on International Affairs and the Peace Process. He continues to informally advise his country’s senior political and civil society leadership on the peace process, consolidation of democracy, human rights, and socio-economic development.

Born in a small village in a remote part of Nepal, Mr. Gautam managed to acquire higher education at Dartmouth College and Princeton University majoring in international relations and development economics. During the decade-long civil war in Nepal, he worked hard informally to secure the support of the UN and other key players to promote peace and reconciliation in his homeland. He spoke forcefully against violence, impunity and violation of human rights by all parties in the conflict.

Mr. Gautam is the winner of several awards, including the Audrey Hepburn Humanitarian Award in 2008, and Martin Luther King, Jr. Social Justice Award for Lifetime Achievement given by Dartmouth College in 2009. He is the author of “Lost in Transition: Rebuilding Nepal from the Maoist mayhem and mega earthquake” published in 2015, and his forthcoming memoir: “Global Citizen from Gulmi: My journey from the hills of Nepal to the halls of the United Nations”.

Mr. Gautam was nominated by RPCV Doug Hall (Nepal 1968-69).  Doug is "so happy that NPCA has selected Kul Gautum for this year's Wofford award. Kul's long career in the UN and subsequent activity back in Nepal exemplify his dedication to global and national leadership and commitment to goals that all PCVs have shared over the years: international understanding and peace. Throughout his life, he has not been hesitant to praise President Kennedy's vision in establishing the unique institution that is the US Peace Corps."

The selection committee also noted that " Kul Gautam's connections to Peace Corps are extensive and deep, starting with his 7th grade teacher in Nepal I in 1962 through his speech at the 55th anniversary of Peace Corps Nepal in 2017. In the years in between, he dedicated his career to improving lives and working towards peace in all corners of the globe. We are so pleased to honor Kul, who so fully embodies all that the Harris Wofford Global Citizen Award represents."

Visit www.kulgautam.org to learn more about Kul Chandra Gautam.  Want to be present when Mr. Gautam receives the Wofford Award, be sure to register to attend Peace Corps Connect 2018.  Limited space is available.