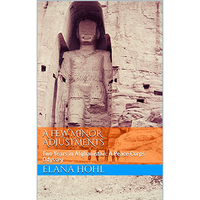 Before Elana Hohl and her husband, Mike, traveled to Afghanistan to serve with the Peace Corps 1971–73, she had only been beyond her native Midwest a handful of times. The journey filled her with constant amazement — at the smells and tastes of foods, the splendor and beauty of the land in which she found herself. That includes her first trip north with an Afghan friend, Faiz, to the Salaang Pass in the heart of the Hindu Kush Mountains — and later to see the enormous statues of Buddha in Bamiyan. The overall experience served up a consistent need for “minor adjustments” — from navigating lengthy greetings, learning differing attitudes toward time, and developing skills at haggling over the price of goods. They learned to understand the importance of the camel, the imperative to save face, the attitude of “making it work” in marriage, the intricacies of hospitality culture, and the vast historical influences of Zoroastrianism, Buddhism, and Islam.

There are the absurd moments as well. Canned cheese, which was provided by UNICEF to alleviate starvation, proves too far a stretch for many Afghans from their dietary customs; the stuff gets resold to foreigners at a discount. Over two years of living with everyday reality in Afghanistan, Hohl comes to have a more nuanced understanding of the effectiveness — or lack thereof — of foreign relief efforts.

There is also an Afghanistan and Peace Corps epilogue to this story. “Our son Chad has spent 20 years in the Army and has seen seven deployments — two of them in Afghanistan,” Hohl writes. “Aaron was a Peace Corps volunteer in Paraguay, working in an agroforestry project. He later earned his Ph.D. in forestry. Our daughter Sarah also joined the Peace Corps and was stationed in a remote village in southeastern Senegal working as a public health Volunteer. She subsequently worked for a non-government organization in Kenya for three years and now holds a Ph.D. in public health.”

Jordan Simmons is an intern with WorldView. He is a studying at Washington University in St. Louis.