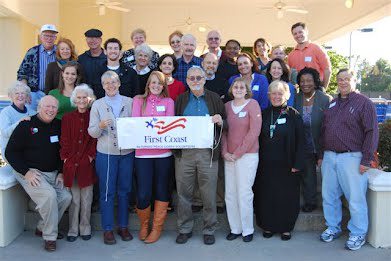 Driven by their commitment to the Peace Corps’ Third Goal and guided by strong leadership, First Coast has far exceeded expectations for not only an NPCA affiliate group, but for any organic community organization. It is truly a model congregation for what de Tocqueville called America’s “civic religion.”

The full breadth of First Coast’s contributions to local and host country communities is astounding. In less than 10 years since its founding—and less than nine years since NPCA affiliation—First Coast has made remarkable wide-ranging impact in educating the public and classrooms on the Peace Corps experience, recruiting Volunteers on campuses, fundraising for Peace Corps Partnership Program projects, participating in the local Multicultural Festivities and the Third Goal International Film Festival, supporting refugee relief services, and providing rare leadership to spur the creation of another NPCA regional affiliate group in the St. Augustine area. Furthermore, First Coast activities regularly incorporate themes of multiculturalism and engage and assist vulnerable and immigrant populations.

First Coast has made advocating for the Peace Corps a core mission, prioritizing the role of NPCA Advocacy Coordinator, facilitating membership action and mass media engagement, and regularly meeting with Florida’s Congressional delegation. Notably, these efforts played a critical role in enlisting the support of former Rep. Ander Crenshaw, Republican co-chair of the Congressional Peace Corps Caucus and the Caucus for Effective Foreign Assistance, who as a member of the Peace Corps’ appropriations subcommittee helped secure for the agency a record funding level for fiscal year 2016. Representative Ted Yoho, a First Coast-area lawmaker, has replaced Rep. Crenshaw on the Caucus for Effective Foreign Assistance.

Additionally, individual accomplishments by First Coast members include: RPCV Leo Alonso D.O., Cuban-American émigré and John F. Kennedy Service Award nominee, who served in Honduras with distinction, helped open the agency’s Miami office to primarily recruit Hispanics, and has been instrumental in providing medical manpower to underserved communities around the world; RPCV Ellen Siler, Jamaica, retiring after 25 years as CEO of Hubbard House, a well-honored center for victims of domestic abuse; current First Coast president Jan Miller, Botswana, Lillian Carter Award nominee, who began her Peace Corps service at the age of 65, and has since undertaken her Third Goal commitment with gusto, particularly through speaking engagements and Habitat for Humanity at home and abroad.

The group’s success is due in large part to core members' commitment to sustaining a consequential community organization driven by their pledge to “bring the world home.” Additionally, member’s efforts to leverage their networks and forge community partnerships has further spread awareness for the Peace Corps and maximized the group’s impact. First Coast is an exemplary organization in its own right and is worthy of an honor in the name and spirit of Director Ruppe.

The annual Loret Miller Ruppe Award — named for the widely admired 10th Director of the Peace Corps — is presented by NPCA to outstanding affiliate groups for projects that promote the Third Goal of Peace Corps or continue to serve host countries, build group spirit and cooperation, and promote service. Eligible projects include those completed within the past two years or on-going for at least three years. The purpose of the award is not only to recognize the great work that NPCA’s groups are doing, but also to generate ideas that other groups may emulate in their communities.