Quote: One of their daughters asked, “Why did you send me to school if I must cover myself and can never go to work?” 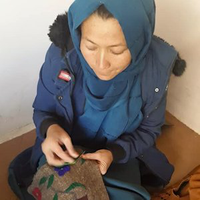 John W. Bing served as a Peace Corps Volunteer in Afghanistan. From a girl in Afghanistan, he shares a painful question she and her family now face.

One of their daughters asked, “Why did you send me to school if I must cover myself and can never go to work?”

It’s a question Bing poses in an essay for the Santa Fe New Mexican. After the recent fall of Kabul, he writes about a project with women weavers in Afghanistan that is supported by Returned Peace Corps Volunteers. Bing served as a Volunteer in Afghanistan 1964–67.

About seven years ago, a group of former Peace Corps volunteers and Afghan Americans began a private project to support women weavers (many of whom were living in caves) in the central part of Afghanistan. We provided looms and financial support so the weavers could produce an indigenous wool product called barak. The project was reaching a point where it would have become self-sustaining when the Taliban began disrupting commerce in that part of the country.

Within the past weeks, the project leader and her family have fled to Kabul, hoping to reach a third country for asylum. Trapped now in a city overtaken by the Taliban, they have gone in search of burqas for their daughters. But the burqas, now required wearing by women of all ages, are sold out.

One of their daughters asked: “Why did you send me to school if I must cover myself and can never go to work?” This is the legacy now for the young women of Afghanistan. It will be a generation or two before they can again take their rightful place in their own society.

The great benefit of mistakes, even large-scale mistakes, is that we can learn from them. Let us hope that we do.