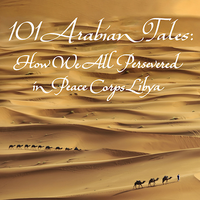 How We All Persevered in Peace Corps Libya

Randy Hobler has taken on the herculean task of writing a comprehensive history of the Peace Corps in Libya, in the form of a collective memoir of 101 Volunteers. He interviewed as many Libya RPCVs as he could find and asked for journals and letters. The result is a collection of tales covering the brief span Volunteers served in Libya, from the training of Libya I to the termination of Libya III before they left their training sites in the U.S. Hobler served in the second group of Volunteers, arriving in October 1968 to teach English to fifth graders. He was traveling in Lebanon when, on September 1, 1969, Muammar al-Qaddafi seized power from King Idris in a military coup. Within a matter of weeks, Qaddafi had kicked out the Peace Corps. Qaddafi’s own rule would last for 40 years.

One year after the Peace Corps program in Libya began, Muammar al-Qaddafi seized power from King Idris in a military coup. Within a matter of weeks, he kicked out the Peace Corps. And he ruled the country for 40 years.

Hobler includes maps and more than 200 photographs. Many stories are humorous, though there are sad, tragic, shocking, and scary ones. Hobler’s group of Volunteers trained in Utah, because it was hot and dry — like Libya. Shocking is when Peace Corps trainers decided that 30 of the trainees should ride little Suzuki motorcycles — which they were learning to use in-country — 500 miles to another site in Arizona, without helmets. The trainees talked them out of it. Frightening is when, in the aftermath of Qaddafi’s coup, Volunteers in Libya find themselves confronted at checkpoints and in airports by teenagers toting automatic rifles.

In a conversation for Tulsa Public Radio about the book, Hobler spoke of how Peace Corps taught him humility when it came to the place of the United States in the world. He also came to see “the sort of demonization of the Arab that we saw that we never were aware of inside our own media bubble inside the United States.” And, he said, “It gave me a deep appreciation that I try to convey in terms of my civic responsibilities.”

This review appears in the special 2022 Books Edition of WorldView magazine. It is adapted from a review originally published by Peace Corps Worldwide. Story updated May 2, 2022.